Michaela Coel won an Emmy for Outstanding Writing for a Limited Series in 2021. In her acceptance speech, she said something that knocked me right off my chair:

“Write the tale that scares you, that makes you feel uncertain, that isn’t comfortable. I dare you.”

The series, I May Destroy You, is based on her experience being sexually assaulted.

During the last 18 months when I was writing and recording Sharing Our Stories, I constantly wrestled with what Coel describes. For example, in Chapter Two: Family of Origin, I struggled with including a scene from one of my live shows where I screamed at my father to “go fuck yourself.” I thought it might be too rough. I thought it might offend people. Then I heard a monologue by Bette Midler in The Coastal Elites that was so personal and so intense it made me cry. If she can do it, I can do it.

I kept the father monologue in the book. Glad I did. Maybe Michaela Coel would give me a pat on the back.

Available as a Download, or as a USB Thumb Drive.

“Life does not go on. It goes nowhere except away. Death goes on.

Going on is what death does for a living.

The secret to surviving in the universe is to be dead.”

Warning: If you are depressed today and maybe feeling hopeless about the state of the world, please DO NOT read this blog post. Do something else – play with your grandchildren, take a walk, watch an old Marx Bros movie.

Today’s piece is about death and dying. 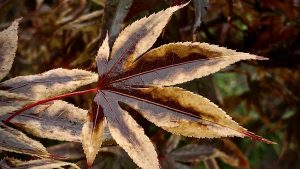 Last week I wrote about MCing Jim Keeffe’s memorial service.  I have been somber and reflective ever since. Then, I noticed the neighborhood is alive with Halloween decorations – more death. (BTW, what the hell is going on with this explosion of Halloween decorations? Why are we into this in the past few years? Even more than Christmas?)

I saw this beautiful Japanese Maple leaf in the process of dying. The day after I took this photo, it was gone. It made me think, this lone leaf existed for several months on this tree. Its job was to help the tree survive and reproduce. The tree itself is dying. With care, Japanese Maples can live to over 100 years. Hmmm, just like humans.

All this made me think about those I’ve lost over the decades. By the time you are my age, 82, you have seen lots of death. Grandparents die. Aunts and uncles die. Parents and siblings die. Sometimes the hardest is when friends start dying. For me, and I bet for you, it is always awful. None of this nonsense about going to “a better place.” No one knows, but my guess the only place we are going is the great void, the great darkness of eternity. Remember what it was like before you were born? That is what it will be like when we die. (BTW, I want to control the time, and place, and process of my own death. That is for another upbeat blog post. Stay tuned.) 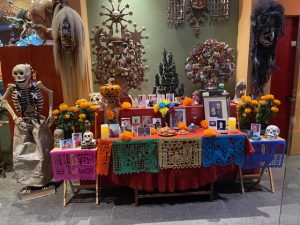 Susan Page wrote a nice reflection on my Jim Keeffe post. She described how there are three deaths in Mexico where she lives:

Of the many deaths I’ve experienced, there are eight that I think about all the time. I want you to meet them. Some of you knew some of them. Only my wife, Mary, knew all of them. I deeply loved them all. In order of their departures… 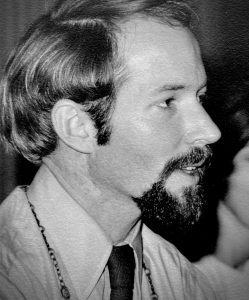 I met John Rose in a ninth-grade drama class at Garfield Junior Hight in Berkeley. We both wanted to be actors. He had more talent than anyone had seen in the Berkeley school system in the past decade. I went on to other things.

John studied at the Pasadena Playhouse, stared in productions on the New York Stage, and had a brilliant acting career.

He died of AIDS in 1989. At an informal memorial in the backroom of an LA bar, about a hundred theater people gathered to pay respects.

One of the producers told me, “John was in a league with Sir Lawrence Olivier.” 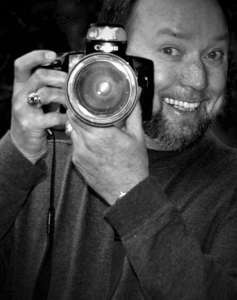 John Cope brought PowerSpeaking into Hewlett-Packard in the late 1980s, then to other companies in the following decade. Along the way, he developed breast cancer (about 3% of cases are in men). Our personal and professional friendship grew. He later joined our Board.

He was in remission for the fourth time when his lungs gave out due to all the radiation he’d had over the years. He had pneumonia. He was in a medically induced coma to help the antibiotics help clear his lungs. He could not speak or move. I sat next to his bed holding his hand. I told him I was there and that I loved him. He squeezed my hand three times.

He was gone a few days later. 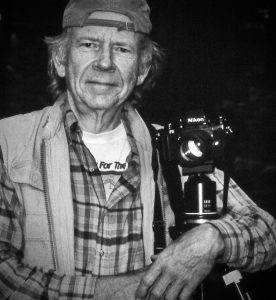 A tall, dignified man got up to speak at a National Speakers Association meeting who people said had “the voice of God.” Sure, Jerry Johnson’s voice was wonderful, but it was what he said that stuck with me. Humanistic to the core.

Jerry spoke of how important it is for men to reach out to each other. So I did reach out, and we became very close over the years. Jerry also became one of the trainers at PowerSpeaking. I visited his home in the mountains. We went shooting in the woods and drank whiskey (not at the same time.)

I later learned Jerry was an ordained Lutheran minister. Although he left the ministry, his spiritual quest continued throughout his life. At the end, even though his cancer gave him precious little time, he also became a Zen priest. 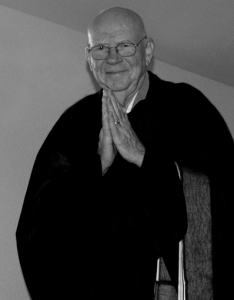 I visited Jerry 10 days before he died.

In private I asked if, now at the time of his ending, was all his spiritual quest of any comfort? He said, “Not at all.” 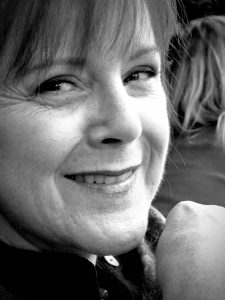 Kelly Killpatrick was my wife Mary’s best friend. For years. She was one of the most vivacious people I’ve ever known. Loved being outrageous and confrontational. She and Mary had great fun on memorable trips to Europe and Indonesia. I considered Kelly a dear friend.

Kelly loved to do African drumming. She invited me to join her in a class. I simply couldn’t keep up, so I quit. Several years after her husband, Ron Stern, died of a brain tumor, she, too, got cancer: pancreatic. It is deadly and fast. I was at her home with her family and her many friends the day she died.

The people from the funeral home came to prepare her body. As they wheeled her to the waiting hearse, I followed her gurney beating on her African drum… slowly. 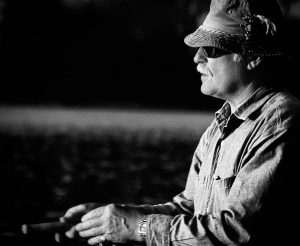 Among his many talents, Don Schaller sang barbershop. Toward the end of my 50+ year friendship with him, Don’s, MS was taking its toll. In his final weeks, I went to visit him at his home in Truckee with John Hutchison and Jim Keeffe. We sang at his bedside, many songs popular during Don’s early years. He loved “I’m Looking Over a Four-Leaf Clover.” We all sang it with gusto. Don smiled with his eyes.

Weeks later at his memorial service, all 200+ of Don’s friends and family blasted out a version of that song in honor of this wonderful man. Truckee hasn’t been the same since. 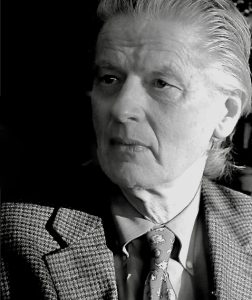 As Robert Fish was dying of prostate cancer that had spread to other organs, John Warren and I went to visit him in Portland. We laughed. We cried. We shared stories of our time together at PowerSpeaking. That visit meant the world to Robert and to John and to me.

Robert was a master storyteller. To hear his genius, go to my blog called “First Kiss.”

He was the closest I’ve ever  had to a brother. 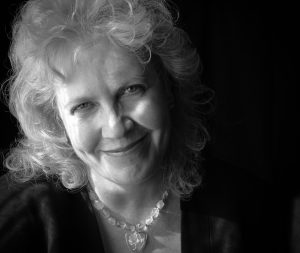 Lu Ellen Schafer had always been “full figured.” She came to one of my one-man shows and had slimmed down a lot. I said, “Wow, you look great. How did you drop the weight?” She said calmly, “I have cancer.”

Lu Ellen was a world-class consultant and trainer in the area of cross-cultural business communication. She declined rapidly after my show. I coordinated with her husband, Marco Louis Salazar about a time to visit. I had my private time with her. With sunken eyes, she looked at me and said with great tenderness, “I want to see you one more time before I die.” The next few days were packed with loved ones. I could not fit into the schedule. 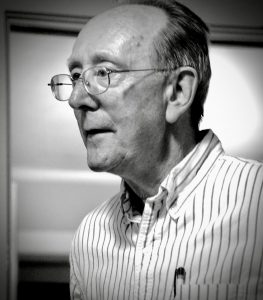 Scientist and organic chemistry professor, Jim Keeffe, was also a serious humanist. He was once asked to review a new country music album. He was lukewarm about it. He wrote that the music had been sanitized and the fiddle had become a violin.

While he knew a lot about fine wine and classical music, in his final days after his massive stroke, that is not what he wanted to talk about. It was more about the 1940 Ford Coupe he owned in high school. It was about Merle Haggard and Willie Nelson. We reminisced about our adventures in encounter groups at the Humanist Institute in the early 1970s.

At his memorial a few weeks ago, I learned so much more about Jim than I’d ever known. He was a track star in high school, setting a record that stands today. He was student body president… it goes on and on.

Reviewing these people that have been so hard to lose, I’m reminded of a comment from Kathleen Shadick, my sister-in-law, reflecting on losing her husband earlier this year. “The memorial allowed us to begin the process of healing as we stumble through our lifelong journey of grief.” Yes, there is much grief in the loses we experience. Fortunately, though, there is also much joy as we reflect on the stories we’ve shared and remember…as we stumble.
Jim’s son, Vincent Keeffe, did the graphics for the memorial. Like me, he was delighted to know more about Jim’s life,
If only Jim were here himself to see it. It was great to learn some parts about him for the first time and to remember the good times with him.

“One’s life has value so long as one attributes value to the lives of others.”

6 thoughts on “I Dare You and Death Goes On”