In March, I turn 84. Jesus. How did this happen? It all went so fast: School. Corporate. PowerSpeaking. Family. Hair turning white. Senior citizen. Medicare. Social security. Wow. The days dwindle down to a precious few…

Now I sit every morning in my red easy chair reading the paper and staring longingly out the window waiting for the glorious morning light to slowly creep over the horizon. Nowhere to go. No demands. Phone does not ring. Very few emails. What is the point of going on? Dead man walking? The Golden Years? Yes, this is the joy of retirement. Nap in the afternoon. Lunch with friends. Remembering high school and growing up in Berkeley during the 50s and 60s. Folk music. Psychotherapy. Hot rods. Liberal politics. So, “What’s it all about Alfie?”

Nothing at all, really. Our lives zip by. “Sound and fury, signifying nothing.” Susan Page tells me that in Mexico there are three deaths, #1 when your body dies; #2 when they put you in the ground; #3 when no one remembers you.

There is no afterlife. Good news: no hell. Bad news: no heaven. It’s “lights out” – for eternity. Just like it was before we were born. No floating on clouds playing harps and spending eternity with our loved ones. Jesus, who’d want that? I spent years in therapy trying to get away from my parents.

So, what happens when Ol’ Rick the bucket kicks? Please, spare me a “celebration of life.” We don’t need to celebrate anything. What a way of denying the sorrow of losing someone we love. Celebration of life, my ass.

Instead I am looking forward to a “natural burial,” which is legal in California. Wrap me up in burlap and roll me into the hole in the ground. Then let nature take its course. As we used to sing at scout camp,

“The worms crawl in,

and the worms crawl out.

So what else does this graduate of the “Slow Reading Group” in grammar school, and the “Not Going to College Group” in high school want to celebrate at his death? Oddly enough, his writing.

Writing began showing up in upper division psych papers. One professor gave my paper a B+ with the comment in the margin: “Reasonably well written.” Hey, I’ll take it. Looking back from the vantage point of 84 years, along with photography, my writing is a source of pride. When I interviewed Gloria Steinem (thank you Susan Page), she said this about writing: “It is the only time when I don’t feel like I should be doing something else.” It’s like that for me. (My mother mite be happy with that since she was a terific wryter and poette. Thogh she constantly corected my speling. Fuque that!) In later years, I discovered I’d rather be wrong than corrected by you!!!

Here is what I want to say about all that. You might think this is strange… A few years ago, I took the covers of all my books and tapes and had them framed. A kind of paean to one part of my 84 years that I am hugely proud of.  This giant piece of art hangs on the wall in our “family room.” 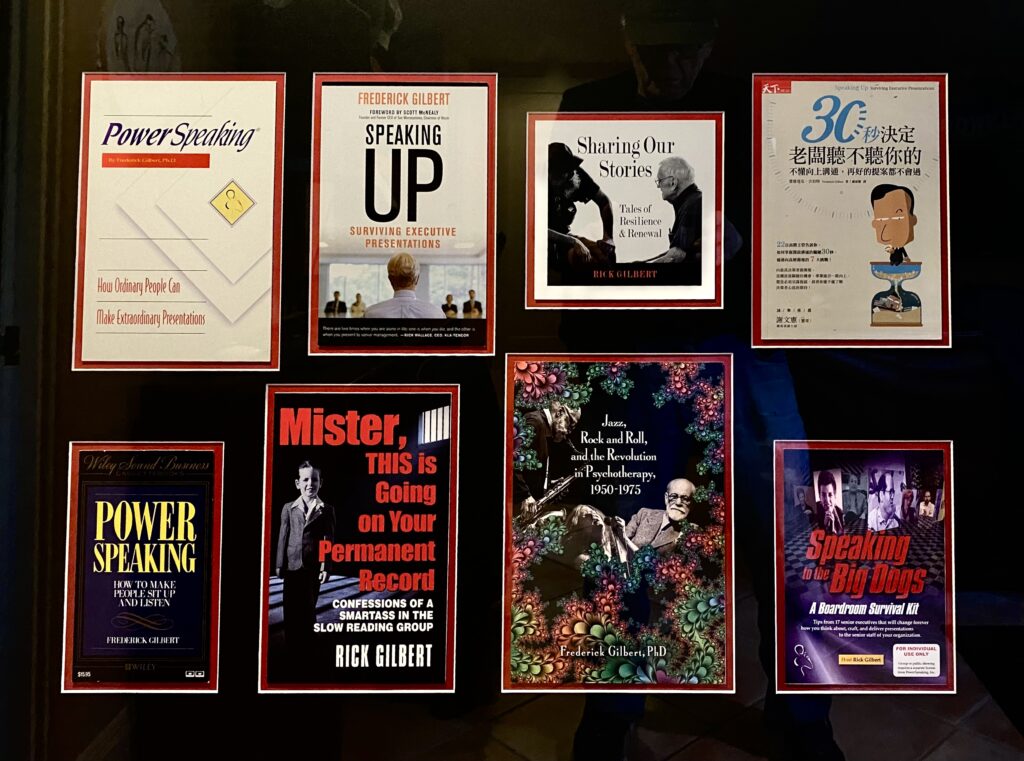 It reflects eight stages of my life (and many years pounding away on a keyboard). All were self-published except Speaking Up. The eight pieces are (top left to right),

* Sharing Our Stories: Tales of Resilience and Renewal. Audiotape.

* You’ve Go 30 Seconds: Surviving Executive Presentations. This is the Chinese translation of Speaking Up. They changed the title. Much better. Wish I’d thought of that.

* PowerSpeaking: How to Make People Sit Up and Listen. Published by John Wiley & Sons. Listed as a best seller.

* Mister, This is Going on Your Permanent Record: Confessions of a Smart Ass in the Slow Reading Group.

* Jazz, Rock ‘n’ Roll, and the Revolution in Psychotherapy, 1940 – 1975. This is my PhD dissertation at the Saybrook Institute.

* Speaking to the Big Dogs:  A Boardroom Survival Kit. A DVD of interviews with Silicon Valley CEOs. This later evolved into Speaking Up.

(In addition to this are the 200+ articles I published over the years. Hmmm, wonder if Miss Hates Children Watts ever published one word – you know, like how to help children learn to read. She is rotting in hell as we speak. Of course, I’m over all this after years of therapy!)

Maybe at my graveside, as they roll my burlap-wrapped body into the grave, there will be an easel with this monster art work on it. Someone will say, “Well Rick asked me to say, ‘What did I do in life? My family, Mary, and Katy, PowerSpeaking, Inc., and all these goddamn books. Good-bye. Won’t see you in paradise.'”

“The cradle rocks above an abyss,

and common sense tells us that our existence

is but a brief crack of light

between two eternities of darkness.”

“In the Bay Area there are 60 Billionaires and 7,000 homeless people.”

In the 1950s and 1960s when I was coming of age, there were no billionaires in the Bay Area, and only the occasional “bum.” What we did have was much higher taxes on the wealthy and well-functioning state hospitals, like Agnew. These hospitals cared for people who could not care for themselves.

The solution to our homeless problem is not temporary housing, it is a redistribution of wealth via higher taxes on the wealthy and a much stronger social safety net support system – in this case, the rebuilding of state hospitals.Goddamn it, why don’t we solve this problem!

Nothing is more important than the safety of our children, blah, blah, blah…

Tired of this blah, blah bullshit? Since the pandemic began, gun manufactures

2030. Until that changes, gun violence will continue to grow. Too bad about all