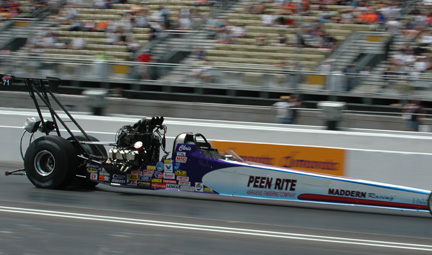 In 1973, I was teaching at SF State in a new program for upper division psychology students. Students could design their own programs and faculty could try new ways of teaching.
In a large meeting of 150 interested students, 6 regular faculty and 4 graduate students were presenting new classes. After the faculty spoke, it was time for the grad students. I stood up and announced a class I wanted to offer called the “Psychology of Drag Racing.”

Sitting next to me was a very traditional visiting professor from Cambridge.  As I spoke, I could see the veins in his neck standing out on his throat as he loudly whispered, “You can’t be serious!!!” He was shaking with outrage. With a shaking voice I said,

“What I want to do is a field study of the difference between professional and amateur drag racers. What about professional sponsorship? What about family support? What about fear of crashes, maybe death?  We will go out to local drag strips and interview drag racers, transcribe the tapes, analyze the data, and write a research paper.”

When I sat down, my heart was pounding. I had no idea what would happen. I was trembling, fearful that students would not respond, and even more terrified the professors would ridicule me.

Seven students signed up for my class. We met for a year. We visited the drag races several times and interviewed amateur and top-rated professional drag racers, including Don Garlits the “Big Daddy” of drag racing. At the end of the year we produced a 15-page research paper contrasting the lives of professional and amateur drag racers.

The class offerings of the professor from Cambridge folded after two weeks.