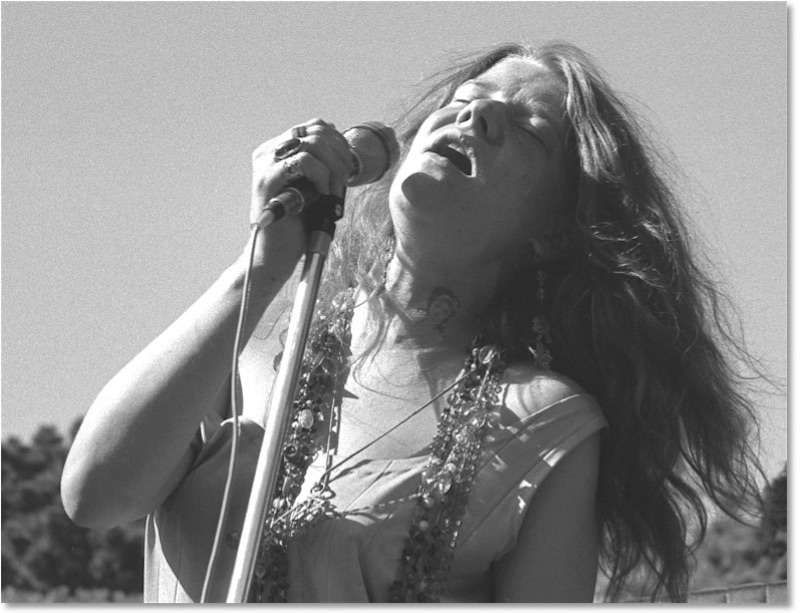 This powerful new documentary about Janis Joplin tells the story of her painful childhood, her raise to a rock ‘n’ roll icon, and her tragic early death, in a Los Angeles motel. She had just recorded her #1 hit, “Me and Bobby McGee.” She was only 27 years old.

She accessed her personal pain in all her music. That is why it spoke to so many of us. We’ve all been there. We’ve all had someone “take a little piece of our hearts.” By helping us feel our pain, she helped us heal. Yet, she went home alone after each show.

John Byrne Cooke was her road manager, and the person who found her dead in her motel room. His biography of her, “On the Road with Janis Joplin,” was published in 2014. He concludes the book by recalling a dream he had a year after her death. It was all about her vulnerability. In the dream, she comes off stage after a wildly successful show. As the audience is screaming approval,

“She comes tripping down the ramp to where I am waiting. I see in her face the same little-girl uncertainty I had seen so many times in her life. Despite the sustained applause, there is real concern in her voice when she asks, ‘Did I do okay?’

I take her in my arms and hug her with all my strength. ‘You did great.’

The best photo op of my life came in October of 1966 in Golden Gate Park. From a nearby meadow, I heard the sounds of a rock ‘n’ roll band like I had never heard before. The band was Big Brother and the Holding Company, but it was the girl singer who pulled me in like a moth to a flame.

The band was on the back of a flatbed truck. I elbowed my way to the front, then to the back of the truck, and finally climbed up on it. I took shots just 10 feet away from her. Please take a look at them here:

Also, see the movie. It will be worth your time. One great story from the film:

Janis’ parents were at the Avalon Ballroom in San Francisco for one of her shows. Her mother turned to her father and said, “You know dear, I don’t think we are going to have much influence anymore.”

One thought on “Janis, Little Girl Blue (a documentary)”