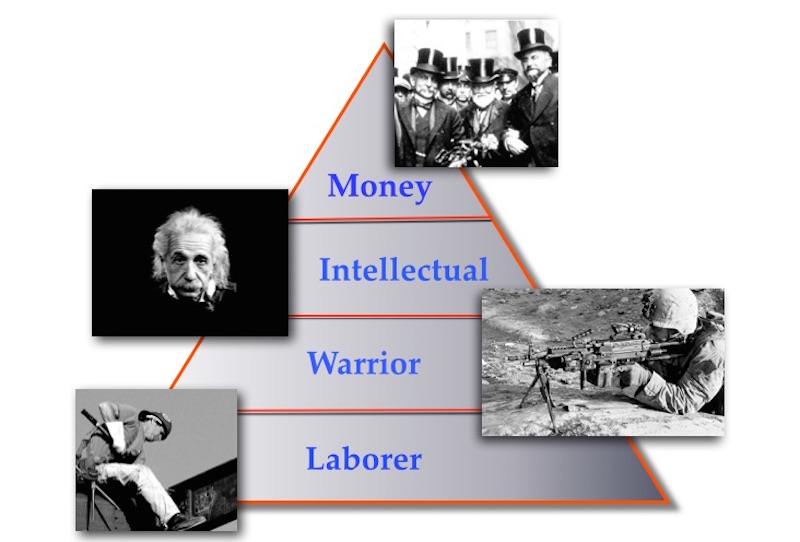 The world is run by the fat cats at the top. Always has been. Under them are the intellectuals (doctors, lawyers, professors, clergy, etc); under them are the warriors (athletes, police, soldiers, etc); and at the bottom are the laborers. If the flow of money and opportunity up and down the pyramid is seen as fair and just, then things remain calm and people are content. (For a deeper look at these relationships, read “The Power Elite” by C. Wright Mills.)

As happens often in history, though, the people at the top get too greedy, and all hell breaks lose: i.e. The French, Russian and American revolutions. According to this widely accepted economic theory, when everything falls apart, the whole pyramid collapses, and then slowly rebuilds itself.

Statistics, NYT op-ed pieces, and Pew Research studies by the boatload reflect how we are now in a “reverse Robin Hood” phase of economic history.

“The wealthy use their money to buy policy, and specifically, tax policy. That’s why these egregious loopholes exist, and why it’s so hard to close them.” (NYT, 12/29/15.)

As John Stewart famously said, “Our complex tax code was not written by poor people.”

The far right is terrified that “socialist” Barack Obama is “redistributing the wealth.”  Talk show hosts and cable TV’s talking heads from places like the Heritage Foundation are right about wealth redistribution. But they are all screwed up on the direction. Obama is not taking it from the wealthy; the far right is draining it from the poor and giving it to the wealthy. And, along the way, they are making sure the lower economic classes have restricted access to the ballot box.

The middle class is sinking like a stone as the number of families at the poverty level continue to grow. For the first time in generations, parents do not believe their children will have a better life than they did. Solid middle-class jobs have gone away, never to return. As people lose their jobs, their healthcare, their homes, and most importantly, their hope, we edge ever closer to revolution. I’m not talking about the dreaded “class warfare” of the far right as it exits on cable TV shows. I’m talking about a shooting war with dead bodies piling up in the streets. More like Syria than the Sunday morning talk shows.

The new film, “The Big Short” clears away the fog to reveal what really happened when the economy tanked in 2007 – 2008. It is a docudrama that takes real events and real people and tells a gripping story of how things went so terribly wrong. Political economist Robert Reich has pointed out that today’s far right and far left movements like “The Tea Party” and “Occupy Wall Street” are both pissed off at the same thing: the way the top 1% is stealing our democracy and our wealth. The Democrats are as much in bed with the top 1% as are the Republicans. That is what this movie is all about. It also explains Donald Trump’s popularity.

It is fun to read reviews of this film. The NYT praises its accuracy, while the WSJ calls it Hollywood bullshit. Just go see it. It’ll blow your mind. Lots of fun stuff like Credit Default Swaps and Collateralized Debt Obligations. Then go home and tune into Netflix and watch the 2013 film, “Assault on Wall Street.” (A working class guy loses everything through no fault of his own and goes berserk. Viewer discretion is advised: If seeing Wall Street scumbags in $3,500 suits get shot dead in their offices is disturbing to you, do not watch this film.)

For further reading, anything by Paul Krugman or Robert Reich, and two outstanding books: “The Crash of 2016” by Thom Hartman and “The Fourth Turning” by William Strauss and Neil Howe. Tighten your seat belts.

One thought on “The Big Short, Assault on Wall Street, and Class Warfare”