Bob was handcuffed to the gurney when the two San Francisco cops wheeled him into the Kaiser ER where I worked as an admitting clerk. He seemed calm. The ER doc asked Bob if he felt ready to be uncuffed and get treatment. He nodded.

We heard he had decked two doctors at Mission Emergency. He’d been a Green Beret in Viet Nam and came back in a psychotic state, hearing voices, and lashing out at everyone.

As the doctor and the cops cautiously took off the last restraint cuff on his left arm, he slowly sat up and looked around. His eyes seemed unfocused. He shook himself awake as the doctor asked some admitting questions. We all got nervous, though, as his eyes grew wider, and his muscles tensed up. Suddenly he jumped off the gurney and started screaming about “…gooks everywhere.” He punched the doctor in the face and headed off down the hall at top speed. The doctor’s nose spurted blood all over his white lab coat.

As the vet rounded the corner we could hear equipment being smashed. He tipped over anything standing. The sound of crashing glass grew louder. All hands gave chase.

To say I was ambivalent about all this would be a huge understatement. I was scared shitless. As I ran down the hall,  I saw him bolt into a patient’s room that had only one door. He was trapped. Entering the room, I saw him crouching near a patient’s bed with a terrified look in his eyes.

So here I was, a 150-lb psychology grad student who had not been in a fight since junior high school, facing Bruce Lee. I was studying Sigmund Freud, Carl Rogers, personality theory, and abnormal psychology. If anyone should know what to say to this guy, it would be me. Ha, ha, ha.

I approached him slowly and said in a calm therapeutic voice, “Don’t worry Bob, you are safe here. You will be OK.” You can imagine how well that little bit of reassurance worked.

He looked at me with fear and hatred in his eyes, reared back on one leg and delivered one hell of a karate kick to my sternum. I went sailing into the corner, hit the wall with a thud and landed in a heap on the floor, breaking my wrist in the process.

Bob lurched out the door and ran down the hall. I could hear the continuing screams about “gooks,” and breaking glass. The cops were now in hot pursuit.

My first  thought was, “Am I seriously hurt?” No. The next  thing that went through my mind was: 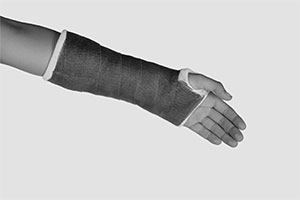 The last I heard, the cops were chasing him down Geary Boulevard.

Slowly the ER put itself back together. Doctors, nurses, orderlies, and us clerks all swapped war stories. What a day this had been. The ER doc, whose nose had now stopped bleeding,  ordered an X-ray of my wrist. Yep, it was broken. I got a cast.

Back at SF State Monday morning, I had a great story to tell, and got lots of sympathy from my personality theory class.

Note to self: “In the future, stay away from psychotic Green Berets having flashbacks.”