As Assistant Attorney General for the State of Wisconsin, my sister-in-law, Maureen McGlynn Flanagan, was involved in an arcane case involving the amount of assets the state allows the remaining spouse to keep when a disabled spouse has to leave the family home to receive Medicaide-supported care in a nursing home. 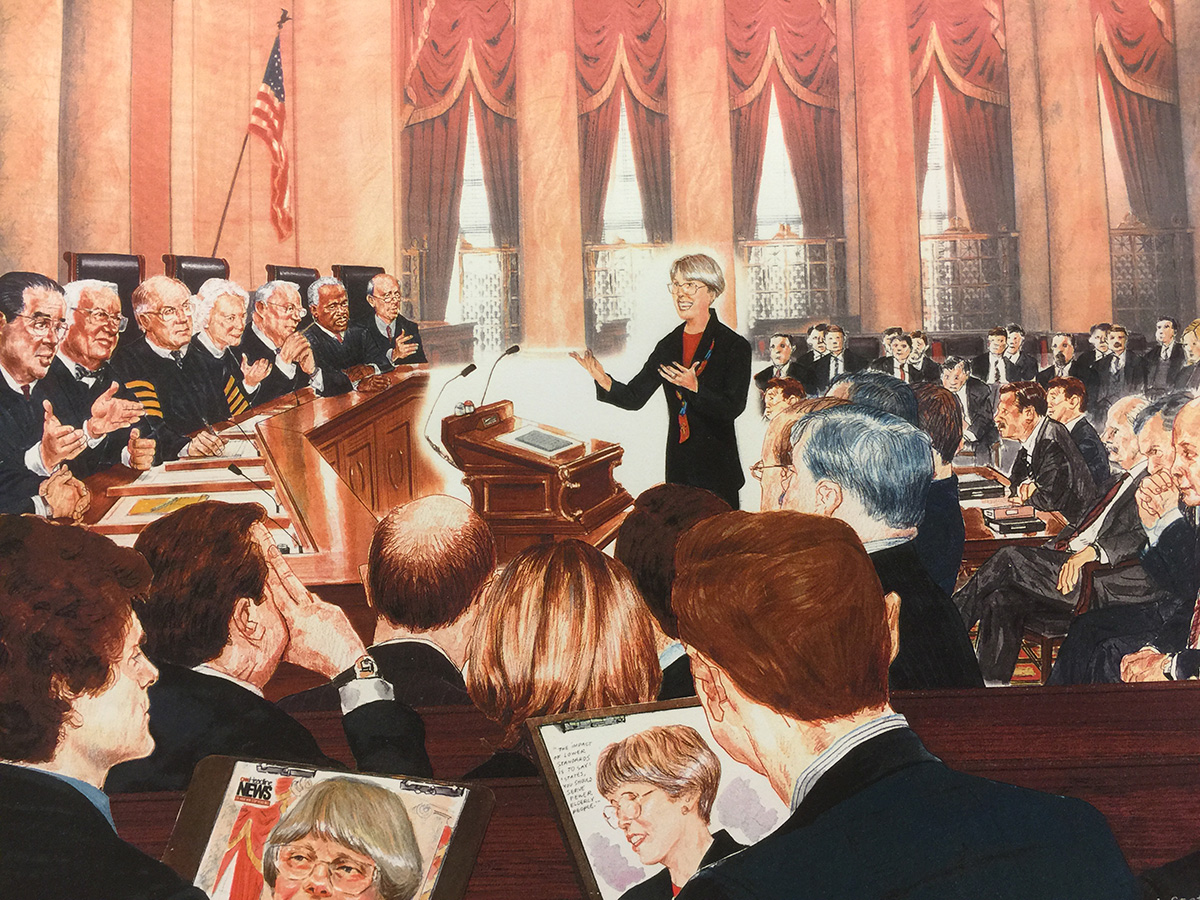 In December, 2001, the case was heard by the United States Supreme Court. Mary, Katy, and I went to Washington to watch Maureen argue her case in front of the highest court in the land.

Maureen had launched into her oral argument for about 30 seconds when Chief Justice Rehnquist interrupted her with a question. From that point on, it was pure improv.  The oral argument was over in an hour, and we exited the building. About 45 minutes later, Maureen and her attorney colleague on the case came out the side door. We were all waiting at the bottom of the steps. It was about 11:00AM.

Out-of-Body Experience When Maureen appeared at the top of the stairs, the family got very excited. They began running toward her. Suddenly, something strange happened. I had an out-of-body experience. I saw the whole scene from a distance. Time slowed down. Everything happened in slow motion. A voice in my head shouted, “Oh, my god, this is the photo op of a lifetime. Hurry, get your goddamn camera.” I got it up to my eye and clicked the shutter about two seconds after the action started. I got a photo that  means the world to me. In my top ten of all time. 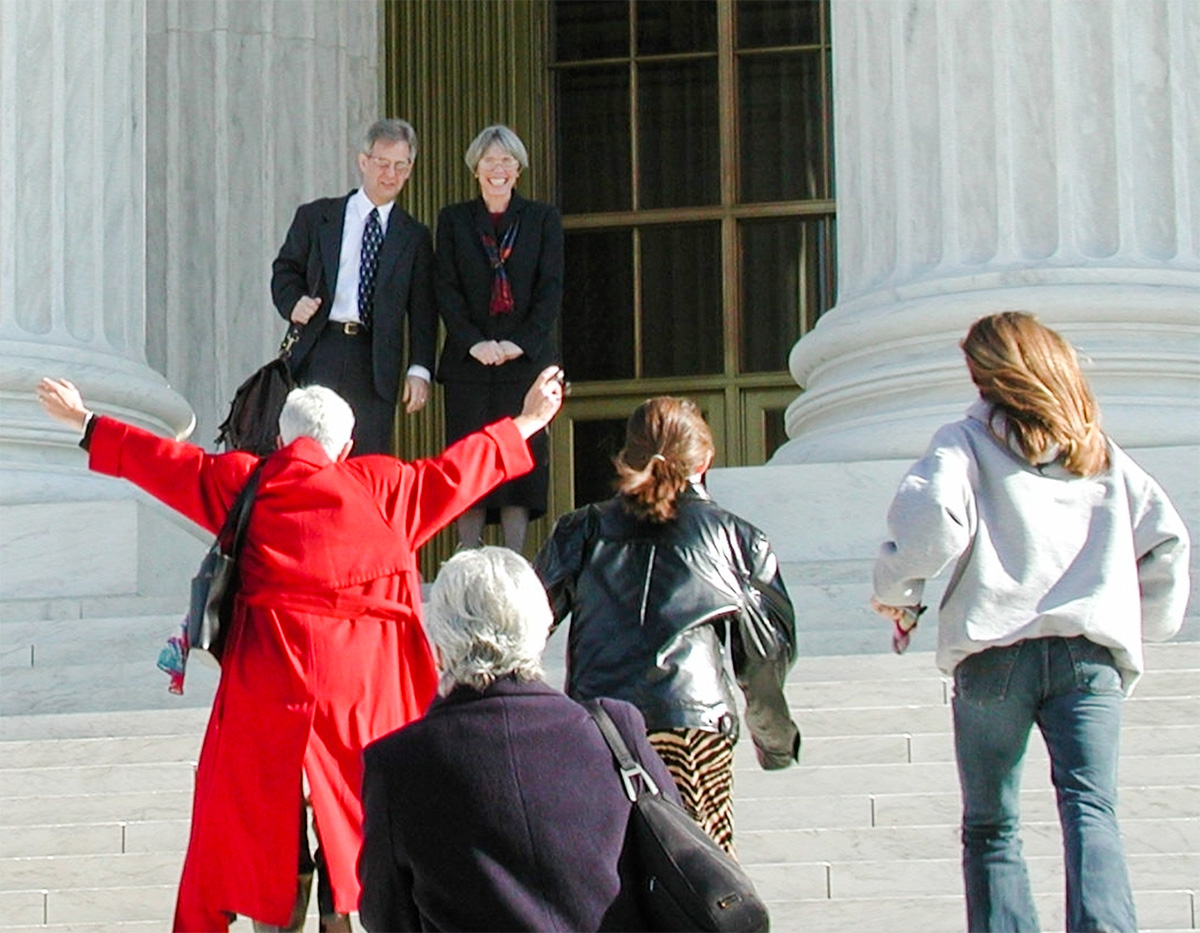 Here is Maureen, having just attained what must be the legal profession’s equivalent of being nominated for an Academy Award. She did an excellent job of arguing her case before the highest court in the land (her team won, by the way). With typical Maureen modesty, she is holding her hands in front of her in an “aw shucks” pose. Two of her younger sisters, her daughter, and a niece are charging up the stairs to embrace her. Sister Kathleen’s red coat pulls the whole composition together.

An hour later we went to a luncheon hosted by David Flanagan, Maureen’s husband, also a lawyer and now a judge. About 40 people were there to celebrate this wonderful day. Of the many toasts and congratulatory speeches, the most memorable for me was by Mary McGlynn, one of Maureen’s sisters.

The patriarch of this McGlynn family was John A. McGlynn, a WW II pilot who survived and evaded capture behind German lines after being shot down in his P-38. He portrayed himself as a rough, cynical hard-drinking Irishman along the lines of Dylan Thomas. He liked to accuse doctors and lawyers of being “licensed thieves.” Now his oldest daughter had attained a pinnacle of success in the legal profession. He missed all of this because he died just two years earlier at the age of 79.

Mary’s talk praised Maureen’s accomplishment, and concluded with this unforgettable line: “Daddy would have been so proud.” Indeed. 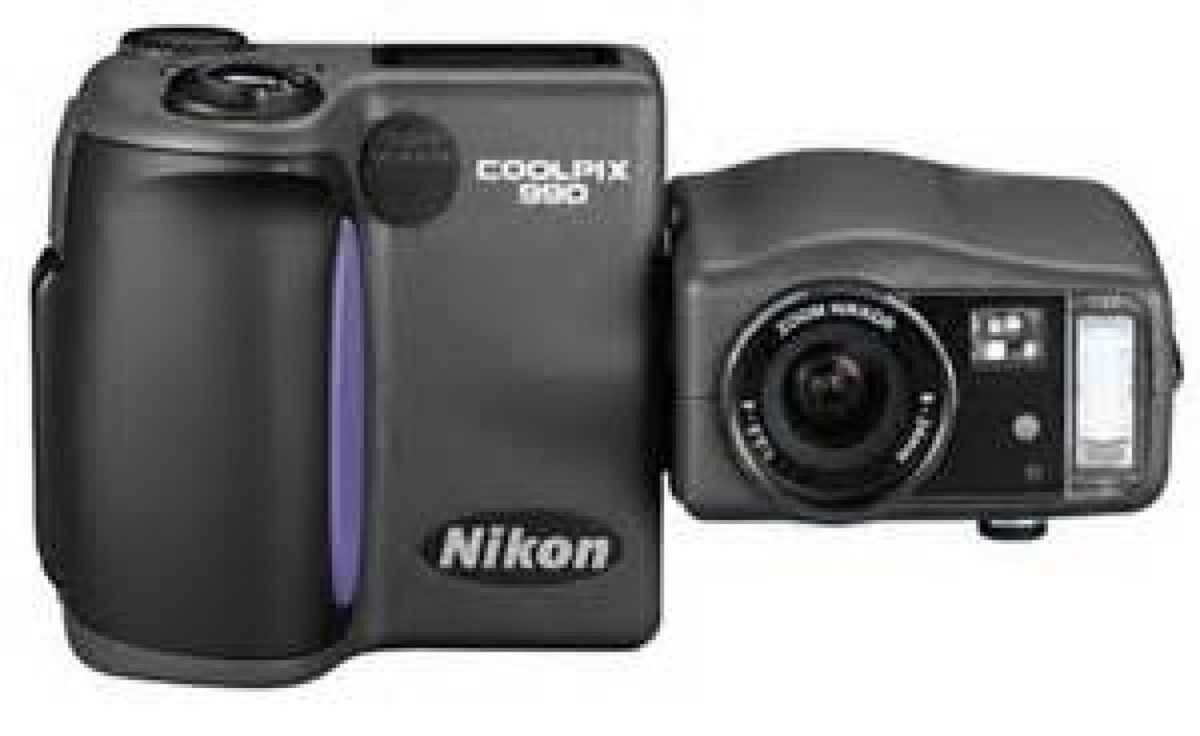 By 2001, the first consumer digital cameras were hitting the market. Mine was a 3.34 megapixel Nikon Coolpix 990 – primitive by today’s standards. Yet, at the right moment, that little camera created a photograph of lasting value.

Here is what Maureen said about it:

“That photo is one of my life treasures. I have it in my personal work area. It always warms my heart to see it.”

Today’s smart phone cameras are 100X more powerful than my old Coolpix, and they are even more portable. Takeaway message: keep your camera handy. You never know when you will produce someone’s “life treasure.”