Or, Why Religion is Bad for Human Beings

I want you to consider giving up religious faith in exchange for the emptiness and existential despair of agnosticism.  Why? Because life on this earthly plane can be better for everyone without religious thinking.

First, let’s consider the silly beliefs of Christianity (others are just as bad).

The Bible is the word of God. It is all there. Hmmm. Really? Let me see now. We are in The Middle East 2,000 years ago. Most people are illiterate. There is no science. People have primitive ideas of how the world works. People think the Earth is flat. People think the sun rotates around the Earth. The people are also oppressed by the Roman Army. Many young men wonder aimlessly in the desert looking for a sign…looking for salvation.

One of those young men, so the story goes, is named Jesus. His mother is a virgin. Now, this guy walks on water, turns water into wine, and heals the sick. Then, after being killed and buried in a cave, rises from the dead, rolls the boulder away from the cave and flies up to the sky.

Oh, but wait. It is all right here in the Bible. Remember, the Bible is the word of God. How did the Bible get written, when, and in what language? Scholars say it wasn’t written until at least 100 years (some say 300 years) after these magical events happened. So, how exactly did it get written? That’s easy. God wrote it along with a few disciples.

More likely, it was written by thousands of religious zealots over hundreds of years. It was written in Greek, Aramic, and Hebrew. The men who wrote it were on a mission to create a new religion. They sat around tables sharing stories. Any chance they got some of this stuff  wrong, or simply made it up? Of course. Hell, we can’t even figure out what happened in Dallas Texas on November 22, 1963 with hundreds of people watching and movie cameras rolling. 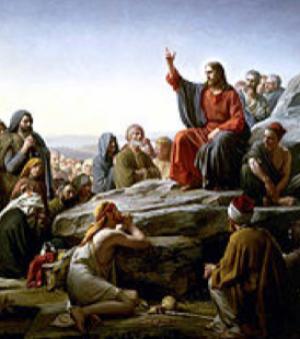 “No, really. He walked on water. My grandmother saw it happen.” “He was a socialist. He said, ‘The first shall be last, and the last shall be first.’” Terrific. That idea will appeal to the down trodden. Hey, 1900 years later, Karl Marx will tell us that is exactly what the ruling classes will say to keep the poor bastards breaking their backs in the fields every day. “Hey, today you may be a slave working for me, but someday in that great ‘by and by’ God will make sure you are seated at the head of the table. But in the meantime, get your sorry ass out there and pick that cotton.” (Or, work on that assembly line, or in that typing pool.) Religion is not only the “opiate of the masses” as Marx said, it is also the best way to enslave the masses, but without chains.

No, truth is, people are capable of boatloads of magical thinking. “Please, sweet Jesus, save me from this shitty life. Please love me. Please give my life meaning.”

The famous book and movie by that name get their basic plot line from a new interpretation of da Vinci’s famous painting, “The Last Supper.” OK, then, that settles it. Finally, history we can believe in. So, let me get this straight. It must be historically accurate because the guy who painted the Last Supper was at the Last Supper, correct? Oh, no? What? He lived 14 centuries later? Oh, OK. Then he did the painting from a photo that was taken at the Last Supper, correct? Oh, they didn’t have photography 2,000 years ago. Well, then Leonardo knew who was sitting at the table because God told him. No? Then he got it from the Bible, you know, the one that has had hundreds of authors over 14 centuries relying on oral history. Of course. Makes it all perfectly clear.

Another bit of religious nonsense.

Never happened. There were not 600,000 Jews wandering in the desert for 40 years. If there were, there would be tons of artifacts buried in the sands. Modern day archeologists  find nothing of the kind. Another fairy tale.

Consider False Memory Syndrome. We know from recent tragedies of supposed family incest that never happened, how susceptible we are to suggestion. Beyond that, memory  has been shown to be very unreliable. Few of us can accurately remember what happened in high school, let alone stories from our grandparents about things that happened a hundred years ago. So relying on “oral history” to justify Biblical and religious stories is untenable. Generations of story tellers made it all up. It is all a myth, a big fat story.

So, why do we buy into this nonsense? Because it reassures us that 1) our lives have meaning, and 2) we really don’t die.

So what is wrong with that? A little superstition never hurt anyone. Does it really matter what god I believe in? After all, they say, “You must respect a person’s religion.” Why? It represents the most primitive, stupid thinking we humans are capable of… and it has HUGE social consequences.

Religion and science can not coexist. Either you believe in the rational mind, or you believe in magic. The Catholic church didn’t appreciate Galileo, and is still apologizing for its stupidity (last apology, 1992). Early geologists, around 1850, were discovering that the Biblical Flood never happened. Their science directly challenged their religious beliefs. Science won. Very painful for them.

The state of Kansas looked to the whole world like total jackasses when their State Board of Education ruled that Creationism must be taught as a valid theory, on a par with evolution. They finally voted out the Board. Yet, evolution is still a debatable topic in some far right religions. Sadly, last year, one third of the Republican presidential candidates admitted during a nationally televised debate that they did not believe in evolution. No wonder the Republican party is losing people in droves.

Stem cell research is an important modern day battle ground for religious fanatics. Their seventh century world view has slowed down research that holds hope for the cure of hundreds of diseases. Until Obama changed Bush’s policies, the United States was losing some of its top scientists to other countries. This in turn, meant we were losing big health care money. For that reason alone, the policy had to change.

Abortion rights and end of life choice (aka “Dr. Assisted Suicide”) are other issues controlled by religious thinking. Recent surveys showed that 73% of the electorate favor end of life choice. The politicians are too afraid of organized religion to change the laws.

Population and the End of the Human Species

Here comes the big one. All religions want more of their own. Many of the major religions discourage birth control. They say, “life is sacred,” read: we want more: Catholics, Mormons, Muslims… fill in the blank. Such policies have helped to over populate the world. Church policies that command the faithful to “go forth and multiply,” combined with magical thinking, “God will take care of everything,” have put humanity in a very precarious place. Some experts predict that the human species has about 90 years left until they go extinct. Is all this due only to religious thinking? Hardly. But, the world population doubling since the end of WW II, certainly has not helped

Well, have I convinced you to give up religion and become an Agnostic? Unlikely. But, let’s review what I am offering. I invite you to give up magical thinking, give up heaven, give up hell, give up Jesus, give up God. In exchange, I give you absolutely nothing. I am not recruiting you for anything. I am not Jim Jones. I am not David Koresh. I am not Jerry Falwell. I promise you nothing but doubt, and most likely, eternal emptiness. All I am promising is clear eyed, rational thinking about our place in the universe. Even, perhaps, a chance to reduce the acceleration of the population explosion, and give humanity a chance to survive.

In my considered judgment, when we die, there is no white light. There are no relatives waiting for us. There is, instead, the consciousness we had before we were born. Remember that? My view is a horrible one. I hope I am wrong. I want to know why the universe is here. You know, the one that is one hundred billion light years across. Again, one hundred billion light years across. Why is it here? What is our place in it.? Hope we all find out some day. Don’t think so.

Welcome to eternity. Sound bleak? Why not commit suicide today? Flowers. Love. Music. Sunlight. Sex. Food. Children. The joy of taking a good shit. The pleasure of accomplishment. The laughter of friends.