My presentation went very well today at Utah State University with over 100 MBA and engineering students attending. Dick Anderson was there which added to the success. He is a legend at USU both because of his success at HP and because of his generous support of the school. Note the name over the door of the auditorium. 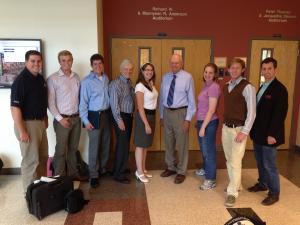 One of the students, Kristen Sims, sat next to her father, Ronald Sims who is a professor of bio engineering. As I told the story of Dick’s influence on the development of Speaking Up 30 years ago, her father leaned over and said, “You know that guy is here.” She said, “You mean in Utah?” He said, “No. Right behind you.” 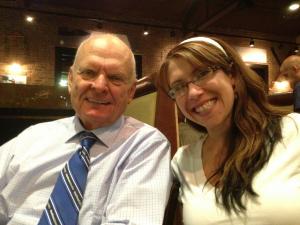 She said she felt intimidated, but at the dinner with a few students, she got to sit next to him and came away feeling very lucky to have met him and heard his stories. Asked what she took away from this meeting, She said “It was his humility, his view of leadership and the fact that he was part of HP during the ‘golden age’ that we’ve used as case studies in my MBA program.” She continued, “I met a legend tonight. Now I want to go back and read those case studies again. The world became a little smaller. Someday I’ll look back on today and realized I sat next to the great man.
I ended by asking Dick if he wanted to go on the road with me and the “Speaking Up Road Show.” He suddenly got quiet.
All of this because I tried to find him through Google, then with a call to USU. Some lives were touched tonight.