This weekend, the Monterey Jazz Festival honored tenor sax player, Wayne Shorter. The acknowledgement was hosted by Herbie Hancock. Both men played with Miles Davis’ second great quartet in the mid to late 60s. I had photographed Herbie and Wayne several years ago and donated the photos to a silent auction to raise money for jazz education. In asking them to personally sign the photos, I got to meet them. I interviewed both about improvisation saying, “I work with executives and urge them to be more improvisational in their business lives. What advice would you have for them?”

Herbie: “They need to be more vulnerable and trust themselves more.” His companion chimed in: “Because nobody else does.” Herbie signing his photo: 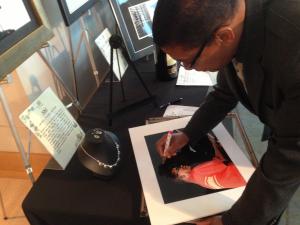 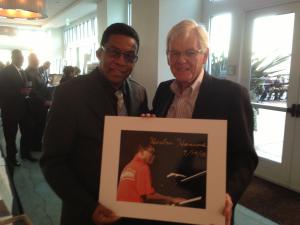 I asked Wayne about improv and business. “Business serves as a resistance to the creative force, like resistence serves to lift an airplane. Art and business is a partnership.” He talked in Zen-like riddles: “The longest way is the shortest way. When it seems all is lost, that is the time you win.”

After dinner, Herbie introduced Wayne by saying, “I’m going to interview myself about Wayne,” and proceded to move from side to side posing questions to himself. Wayne told several stories: When they first played with Miles, there was  a recording session with no rehearsal. Miles said to him, “Do you know my tunes?” The tape started rolling and Wayne blew them out of the water.When asked if he rehearses his band before a gig, he responded, “How can you rehearse the unknown?” He went on to say that it is only in struggle that something good happens.

These world-class jazz musicians reflected just what the executives have told us, “Get right to the point, and be flexible when directions change.”