In Praise of the “Deep state cabal of unelected bureaucrats.”

According to Trump advisor, Stephen Miller, the current impeachment movement comes from a “deep state cabal of unelected bureaucrats,” or DSCUB. I just love this concept. The far right is so good at coming up with conspiracy-laced memes about what is wrong with our country, think Sarah Pallin’s “death panels.” 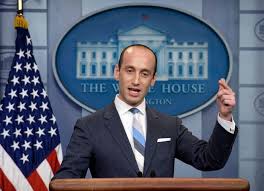 The “deep state” is a catch phrase for the evil big gubment that is robbing us of our freedom, our guns, our religion, our plastic straws and most of all, our money. Then Miller adds the word “bureaucrat,” a word that drives the libertarians to distraction.

Well, Mr. Miller, I happen to think that your dreaded “deep state bureaucrats” are the very people who keep our society running. Let’s say, Mr. Miller, that the street light near your home is burned out. Do you call your libertarian buddies to come out with a tall ladder and replace the bulb? No. You call the Public Works Department of the city where you live. That department of “unelected bureaucrats” run a well-funded service organization (your tax dollars at work – which you hate) that employs blue collar skilled electricians (unionized – which you also hate) that schedules a repair. A big city truck (wasted tax dollars) comes out with a long ladder and two men who scamper up and replace the bulb. Your libertarian pricks are nowhere to be found.

How I learned to love the DSCUBs

The year was 1963. As a new college grad, I worked for the Berkeley City Health Department. The department was staffed with health inspectors, many who had MPH (Master of Public Health) degrees.

As a student at Cal in the fall of 1959, I used to frequent a place called Larry Blake’s Rathskellar on Telegraph Ave.  – a popular beer and hamburger joint a block away from the campus. So I was interested to hear the dustup that happened between Larry Blake and the big, bad “unelected bureaucrats” in the City Health Department.

One day, Larry Blake himself came charging into the director’s office. Slamming the door he started a loud tirade heard throughout the building,

Blake: “Who the hell do you think you are? How dare you write me up for public health violations. I will sue you for this. You can’t just come into  MY restaurant and tell me what to do.”

Director: “Why, yes we can, Mr. Blake. In fact, if you do not fix these violations, we will shut you down.”

Blake (exiting loudly): “You son of a bitch!”

Wow, I saw firsthand the socialist, tax-draining health department filled with power-hungry bureaucrats putting their jack boots on the necks of job creating, entrepreneurs who are the backbone of our economy.

Or, maybe there’s a different way to look at this.

It dawned on me, when I order a hamburger in Larry Blake’s restaurant, I’d like to rest assured that the meat is fresh and that there are no rats running around in the kitchen. Maybe those health department “unelected bureaucrats” are making life better for all of us.

In the VD department where I worked, doctors could treat minors with penicillin without parental consent. Without that anonymity, many youngsters would not come in for treatment, thus endangering their health and further spreading venereal disease throughout the community. Is that what Miller means by “deep state?”

I entered college as a Republican, just like my parents. By the time I left my health department job, I was a solid Democrat. As I’ve grown older, I’ve moved further left. Today, I am stunned by the hatred from the far right for regulations that keep our water and air clean. If Trump could do it, I’m sure he’d get rid of the FDA.

This rage against government agencies that makes life livable for the masses is all about cost. The gubment-hating far right says, “Why should we tax payers spend our hard-earned tax money to clean up the drinking water for, let’s say, the mostly black population in Flint, Michigan? Hell, let ’em drink bottled water.”

So, no, Stephen Miller, I don’t want to live in your Ayn Rand- loving “every-man-for-himself” libertarian world of survival of the fittest. As for me, I’m happy paying taxes to support the “deep state cabal of unelected bureaucrats.” When the street lights go out, I don’t have to change the bulbs myself. Hooray for socialism.

2 thoughts on “In Praise of the “Deep state cabal of unelected bureaucrats.””