I‘m a political junkie. I can’t stop watching these debates. I love to yell and laugh at my TV. If there are a few other Lefties in the room, the volume gets even louder.

For example, when Ted Cruz explained, “There are more words in the tax code than there are in the Bible,” he cleared everything up in one short sentence. The laughter went on for 30 seconds. Hey maybe if we elected Canadian Ted Cruz, we’d get socialized medicine and no guns!

At a bare minimum, I expect the president to be smarter than me. While this is a low bar, Ben Carson didn’t qualify when he confused hummus with Hamas. 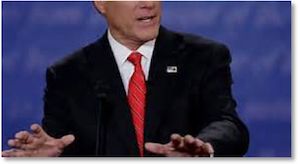 Note that all these penguins come on stage with the same dark blue suits, red or blue solid ties, and an American flag pin on the left lapel. Well, a true patriot should wear not one, but two label pins! How could I vote for someone who just wears ONE flag lapel pin?

Also, most politicians seem unable to end a major policy address without saying, “God bless you, and God bless America.” Imagine a candidate who came out in a gray suit, with no lapel pin, and ended the speech with “Thank you.” Outrageous! Treason! 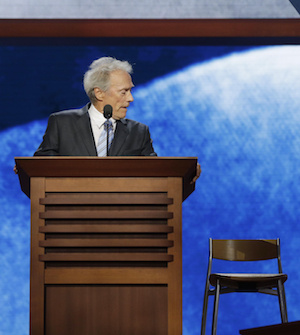 Known as the “empty chair” speech, Eastwood has been excoriated for his 11–minute ramble at the Republican convention in Tampa, Florida. While my colleagues in the communication business, and many in the political press thought the speech was an unmitigated disaster, I loved it, as did the audience.

In September of that year, I interviewed Eastwood about the speech when I saw him at a small fundraising event at the Monterey Jazz Festival. He explained how it evolved:

• He flew in a few hours before and took a nap, not clear what he would say.

• A backstage crew member offered him a chair, suggesting he might want to sit down to give his speech since he was 82 years old. He decided to use the chair as a prop five minutes before he went on. Think of that. A billion+ people watching, and you are virtually improvising on the spot.

• He asks Obama what he would like to say to Romney. He mimes hearing the answer, to which he responds, “Oh, he can’t do that to himself.” The audience roared their approval.

• Finally he ended with the audience screaming “Go ahead,” from Dirty Harry, and he yelled back, “…make my day!”

This is one of the most interesting and creative political speeches of all time. While I’d agree with almost none of Eastwood’s politics, I give him an A- on that speech. (The minus is because he blew his time. He was only supposed to speak for 6 minutes. Also, he was not using notes and seemed to fumble for his lines.) Other than that, this is one hell of a speech, and I recommend you take another look at it: