Pope Francis has accepted Speaker of the House John Boehner’s invitation to address Congress in September. Lots of excitement about this. Many on the left have praised this pope because of his outspoken opinions on many issues from human-caused global warming to the excesses of capitalism. 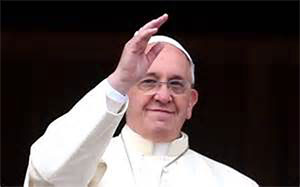 The Pope’s visit is a dream come true for Boehner who is Catholic. Many of my “spiritual, but not religious” friends love Pope Francis. He washes the feet of the poor and speaks out on social issues.

I’m not impressed. Taking a stand against human-caused global warming ten years ago would have been amazing. Today, it is not.

Here are some things the Pope could do that would impress me and even turn me into a supporter:

• Allow his billion-plus followers to use birth control and to get abortions for unwanted pregnancies. If he is serious about global warming, he must realize that overpopulation is one of the main causes.

• Allow women to be priests, and allow priests to marry.

• Open up church financial records. Apparently there has been some financial hanky-panky and the Italian government cannot see what is going on because the Vatican is considered a country. Funny that the Pope would attack the capitalists when the Catholic church is the largest landholder in all of Europe.

• Rethink church dogma. In making his film, Religulous, Bill Maher  interviewed a number of Jesuits in the Vatican. They explained that the intellectual higherups in the church have not, for a very long time, believed in the virgin birth or the resurrection. They told Maher, “People need something to believe in.” Wouldn’t it be interesting if the church gave up those ideas.

I’d like to see Christian religions say something like: “You know these stories about the virgin birth and the resurrection are just metaphors. In addition, it is pretty unlikely there is a heaven or a hell, so let’s put our resources into making life on this planet in the here and now as good as it can be. You know, sort of what Karl Marx had in mind.”

I don’t know if there is life after death. No one knows. I would bet against it. But I do know that people don’t want to die. So, we invented religion to give us hope for eternal life. I’d love to see the Catholic church (and all other religions) give up this idea of eternal life through salvation. Let’s live for this life, not for some future fantasy of eternal life in paradise.

And speaking of dogma, how about “original sin.” When our daughter was born, I held this bundle of joy in my arms and thought, “Original sin? You gotta be kidding!” (Now, when she became an adolescent, that’s another story.)

Since Galileo, religion and science have been at odds. Well, science has won. Magical explanations about how the world works are no longer necessary. Evolution is real. The penicillin that just cured your infection? Science! The universe seems random not planned. The Bible is just a story. Our youth know all this, hence, religion has less appeal to them. “Hmmm? Instant messaging on my smart phone or go to confession? I choose IM.”

The latest surveys show a continuing decline in church membership in the United States. Teenagers, especially, seem to find other things more compelling. In my recent visit to the Christian Science “Mother Church” in Boston, our guide confided, “Young people are staying away in droves.”

So, I am looking forward to hearing what the Pope will say to Congress. If he addresses any of these issues – birth control for starters – I might become a supporter. Stay tuned.

2 thoughts on “Pope Francis, John Boehner, and Me”