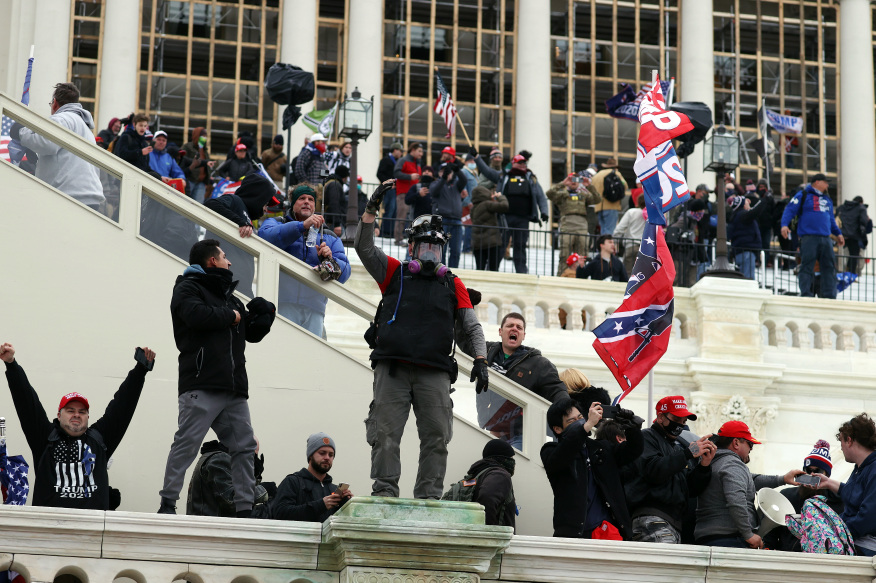 This Is Not Who We Are

Actually, this is exactly who we are. We fled Europe as religious zealots, then stole the land from people who lived here. Then we built our wealth on the backs of slaves. Our racism and stupid religious thinking are driving us into the ditch.

Roughly 73% of Americans believe in angels. About 25% of our fellow citizens (who vote) think the sun revolves around the Earth. 68% of Republicans think the election was rigged. We may not manufacture much in this country anymore, but we are sure damn good at producing dumb thinking. Critical thinking… oh no. The Kardashians and celebrity worship… oh yes.

Most people in this country believe that god had sex with a human who then had a baby “immaculately” who then was crucified, rose from the dead, flew back up to heaven and is keeping track of your sins. All this in preparation for a great judgment day. And we wonder why Trumps’ lies about the election being stolen are so widely believed.

I get tired of hearing what an asshole, jackoff, and scumbag Trump is. And his enablers. I don’t blame Trump. I don’t blame his religiously fanatical followers. Then who is to blame? Pause… Drum roll…… the tax code.

We also have been told that giving the super wealthy more and more tax breaks is good because of “trickle down.” By the way, Bob, (who just lost his minimum wage job) how’s that working for you? Since Reagan: union busting; stagnant wages;  jobs shipped to lower wage countries. Education decimated. Homes lost in 2008. Healthcare “insurance” so bad it drains everyone’s meager savings.

As for those delusional 30-something men smashing in the doors of the capital – just a guess… their 401Ks and their stock portfolios are nonexistent. They probably are not enrolled in next falls’ first year law class at Yale. Just a guess. The economy has been screwing the white working class for the last 50 years. Then we call them deplorables from the fly-over states. Those people last week weren’t interested in a coup. They didn’t have plans to install a new government – much less run one. They are just enraged and want to smash things up… including taking a shit in the capital. What we get when people feel hopeless.

So what we don’t hear about is how little taxes the super wealthy pay. Or that we have 630 billionaires in this county who can do whatever the hell they want with their money – like launch private rocket ships, or buy islands in the Pacific. Meanwhile, education, healthcare, and infrastructure, are falling apart – while the 800-pound gorilla: global warming – is ignored. Homelessness. Public housing and transportation – tragedies. Drug addiction. Suicide.

The American Dream has become: “Get all you can. Screw everyone else.” The stock market is booming. Wonder how that helps the homeless? Until we confront income inequality we will be guaranteed class warfare. Whether it is rioting  over BLM or smashing into state and federal capitals, people are PISSED OFF. If people continue to feel hopeless and disrespected, eventually they will swarm over the barricades and burn it down.

Vaccines? Easy for Christ sake. Willy Brown nailed it in Sunday’s Chronicle. We did it with Polio. The Army. The National Guard. In all grade schools. People line up and get the shot. No money. No waiting. Just fucking do it! All it takes is money and political will. “Oh, oh, does that mean that   Elon Musk  won’t have money to shoot off his rockets?” Your damn right it does. And one more thing. Masks are mandatory. Just like seatbelts and not smoking in public spaces. No mask? You get a $100 fine.

We are losing a 9/11 or a Pearl Harbor, or 10 jumbo jets every day, and no one seems to give shit. Of course we all know that Public Health is silly – or maybe even a commie plot. Bunch of eggheads.

We must invest in our people again… and that means redistribution of the wealth thru much much higher taxes on the super wealthy – nationwide. No more moving to low tax states. If we don’t… trust me… the hopeless are going to burn it down. Just like they broke through the barricades in the capital, the 1%’s gated communities won’t be able to hold them back.