A governmental “planned economy” or a “laissez-fair” market-driven economy – which is best? Analogizing from the 1837 story of Goldilocks and the Three Bears, a “Papa Bear” economy is run by an all-powerful centralized government, while a “Baby Bear” economy is a wide-open, every-man-for- himself society.

Our country is committed to the Baby Bear model, and has been since the dreadful days of Ronald “Government is not the solution, government is the problem” Reagan (1981).” For the past 40 years, a growing number of our fellow citizens have been persuaded that Reagan was right (thanks Fox News, Ayn Rand, Rush Limbaugh, Sean Hannity, and the other right-wing wing-nuts). That is what has helped a string of Republicans to be elected after Reagan, and especially our current president.

BTW that Reagan quote is dog whistle for: every man for himself; what is mine is mine – you can go to     hell;why should I pay for your stupidity and laziness; I work hard, why should the government take my   money and give it to some lazy welfare queen driving a Cadillac; the American dream: get as much as you can for yourself.

Why Are We in This Mess

So, how does all this effect our current Covid-19 imminent disaster? If you buy into Reagan’s nonsense, then all government expenses – except, of course, the military, are an abomination. Today there are enough people who believe this crap to elect politicians who reflect their world view. So we elect a president and down ballot positions, who detest government. This is amazing to me. We have a government filled with people who HATE government. They see their job as finding a way to cripple and dismantle federal and state governments. Think Grover Norquist who wants to drown government in the bathtub or Steve Bannon who wants to kill the “administrative state”.

Trump appoints people to key cabinet positions who are known 1) to have zero experience in their areas, and 2) are committed to eliminating their departments. (Think Betsy DeVos’ contempt for public education. Hey, why would we want to teach the slaves how to read?)

On top of that, Trump and many of his sycophants know nothing about science, or outright hate it. They promote religion while ignoring or belittling science and reason. For example, Ben Carson, MD, a former brain surgeon and now Secretary of Housing and Urban Development, does not believe in evolution. How the hell do you get through medical school let alone, undergraduate biology with such stupidity? But, hey, Ben sure believes in God.

Speaking of God, the Vatican and churches around the world are cancelling all services to help stop the spread of the virus. I guess their prayers to that non-existent invisible man in the sky are going unanswered. Hey, let’s see what happens if we go with Charles Darwin and science instead of prayer and Jesus Christ.

So Trump comes in to office and fires all the experts who know about silly stuff like Public Health. You know, those PhDs and MDs, and OMG the unelected bureaucrats (see my blog:https://www.rickgilbert.net/photography/5942/becoming-a-liberal/) who actually might know what to do in a real crisis.  So experts are fired and departments are underfunded. When the shit hits the fan, there are not enough hospital beds, first responders, nurses and doctors, and equipment like ventilators and protective garb to respond effectively.

Of course, this all gets back to the GOP’s sacred belief that healthcare is a privilege for people who can afford it, and that healthcare insurance companies need to MAKE MONEY so their grossly overpaid CEOs (some up to $100M /year) and shareholders can make a profit when we get sick. What is wrong with this model?

At least we aren’t like those commie countries like Canada, France, Germany, England, Denmark, etc., etc. who believe the role of government is to actually care for its citizens. Instead of individuals paying obscene amounts of money for healthcare insurance, these countries pay for their health care costs through taxation. And, oh, BTW, no one gets wealthy when people get sick. What a concept.

Today, what happens if someone needs to be tested for the virus? Very little. Not enough test kits, or people to administer and read the tests. Furthermore, if you try to get tested, you get tangled up in, “Love to help, Bob, but do you have insurance? With who? Deductible? Oh, no insurance? Sorry, you lose.” Congress is trying to fix this, but it may be too little too late.

For those one percenters who love our fee-for-service capitalistic model that denies service to infected people – here is the irony: your billions won’t protect you. You keep people from being diagnosed and treated, and guess what? The infections spread, even to your gated communities. Pretty soon, you too, test positive. Karl Marx is laughing in heaven.

Speaking of Marx: The Economics of All This

This current crisis is bringing to the surface the dangerous frailty of our system and our “safety net.” With so many hourly workers uninsured and living paycheck to paycheck, it won’t take much of a jolt to bring down the whole system.

Let’s say you are a maid at a local hotel, or a waitress at a local restaurant. You are a single mom with two kids. Your kids’ school closes due to this coronavirus emergency. You have no backup childcare and couldn’t afford it even if you did. You have to stay home with the kids. Can you take a sick day, or take a day off for child care? Your hourly work in the “gig economy” offers no such benefits. There are about 57 million people in this situation. Not only are you now likely to lose your job and perhaps become homeless with your kids, the restaurant or hotel where you work will lose your labor which they need to serve their customers.

My friend, John Lee, owns and operates three Redwood City restaurants, including my favorite, the Talk of Broadway. He employs about 30 people as cooks, bus boys, servers, etc. He said it is hard to get cooks because of housing costs. Many have to commute from places like Livermore.  If he increased their pay so they could live closer, he would have to increase his costs to his customers, thereby losing business. 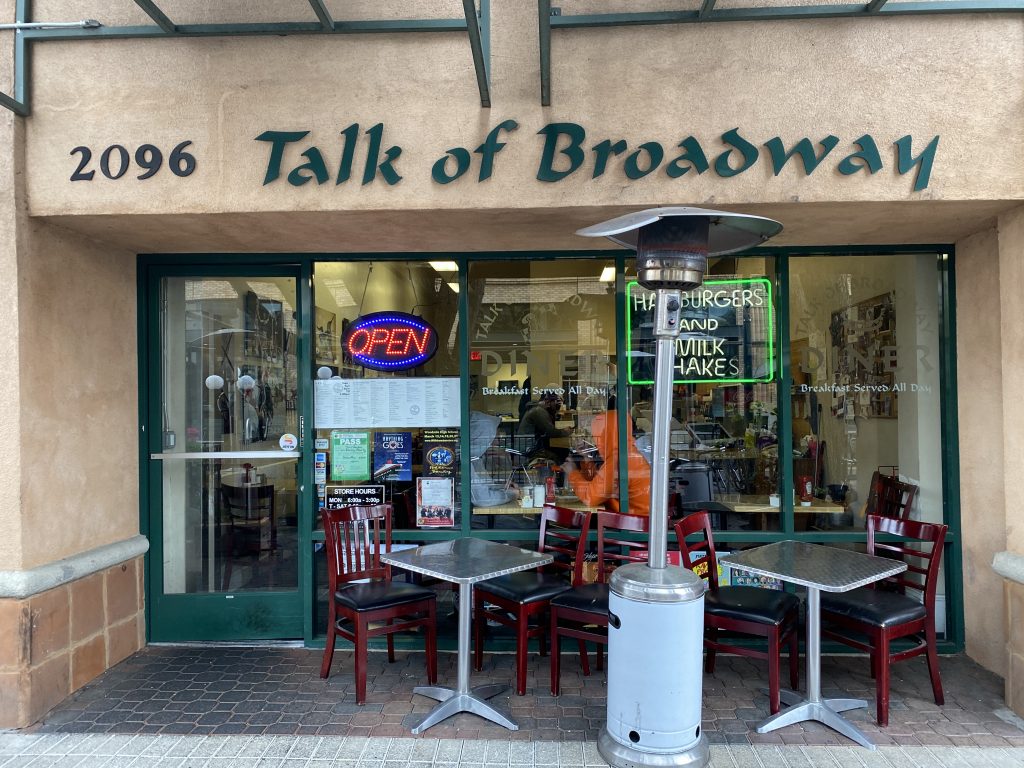 In addition, his fear is that Redwood City is going to close all restaurants due to the virus and he will be forced to let everyone go. Now, multiply this story times tens of thousands of restaurants in California and millions across the Unity States. With tens of millions of out-of-work. low-wage people out on the streets without a job, without income, without healthcare, maybe even without a place to live – imagine the chaos.

We are hearing about the Republicans and Democrats working together to come up with emergency funding to give people things like paid sick leave, food aid, unemployment insurance, or even suspended mortgage payments.

Rest assured this has nothing to do with caring about the suffering of those at the bottom of the economic ladder. Congress’ real allegiance is to their corporate masters that give them their marching orders. The focus is not on the cook and waitress at Talk of Broadway, but on Mark Zuckerberg who owns the new building across the street.

What they really fear is millions of people taking to the streets as our economy collapses. This is some serious shit.

I have been in one communist country, Yugoslavia, in 1970 during the Tito years.  I recall going to the grocery stores. Shopping for, let’s say, toothpaste, there was one brand with a red label: “Toothpaste.” In contrast, in our supermarkets, if you want toothpaste, you can choose between 1,000 brands (according to Google). What a tragic waste of resources, both physical the human.

I wouldn’t want to live under a communist system with a planned economy and  big brother government control, that I would call “Papa Bear.” But, we have, in my judgment, too little control in our “Baby Bear” economy. It is perfectly OK in our low-control Baby Bear economy for one person to get so rich they buy an island in the Pacific, or develop private a rocket ship to give people rides into suborbital flight. Meanwhile, 30% of our fellow citizens live paycheck to paycheck and cannot afford to see a doctor because they have no healthcare insurance. Teachers are underpaid and our infrastructure is a mess.

I would like to see us maintain our “free enterprise” economy that rewards the entrepreneurial spirit but also redirects our massive resources toward the good of the whole – you know, good old Marxist “From each according to their ability, to each according to their need.” So I’m talking about something in between Papa Bear control and Baby Bear laissez-fair free-for-all. I call it “Just Right” Goldilocks capitalism.

Such a system would drastically reduce the number of millionaires and billionaires in our society. At the same time it could restore the middle class and throw a lifeline to those in abject poverty like our pathetic homeless population we now see under the freeways and in doorways in downtown centers – where we let them urinate, defecate, shoot up, and die.

All of this could reduce our fear of a strong, effective, centralized government at both the state and national level. Sorry, Ron Reagan, the government often IS the solution. Our hatred of taxes and strong government has resulted in this hopeless mess during the Coronavirus pandemic. When we hate government and its services, how can we respond to a crisis? Our resources of expertise and materiales have been purposely eliminated to save  tax dollars. So this is what we get. As Oliver Wendell Holmes said, “Taxes are what we pay for a civilized society.”

I received a plea from the Howard Jarvis Taxpayers Association asking for my support to strengthen Prop 13. I responded:

“If you hate taxes so much, you should move to Somalia. They pay almost no taxes. You can do everything for yourself, including drilling your own water wells and paying for your own army. BTW, how do you like all the homeless encampments under our freeways and RVs along El Camino? Many of those people used to be housed in state hospitals, paid for though taxes. How do you like it Jarvis?

You can go straight to hell.”

The End of Trump

Trump’s total incompetence with all this has to be a wakeup call for even his loyal and miss-informed base. If the election were today, he’d lose in landslide to almost any democrat.

The fumbling “Keystone Cops” absurd chaos of our current piecemeal system has brought into focus our need for a unified approach to national healthcare – not a patchwork of for-profit insurance plans that make their money by denying us the care we pay for.

It is now clear that America First means America alone. We need to be part of the global community.

Science, Rationality, and Expertise are Good

Trump’s hatred of science and expertise is clearly dangerous. The vacuousness of his happy talk approach makes it so much worse. We yearn for the expertise of, for example, a Dr. Anthony Fauci.

The need for an effective, federal government that works cooperatively with state governments has never been clearer than now. Ex: FEEMA, CDC, FDA, etc.

It is clear how desperately we need a trustworthy voice leading our nation. States and cities going it alone makes it hard for Americans to know who to believe.

We are at some kind of inflection point. Tighten your seatbelt. We’re in for a bumpy ride.

Next Time: The Story of a New Roof