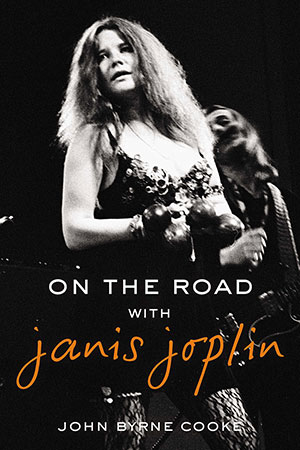 John Byrne Cooke was the road manager for Big Brother and the Holding Company from 1967, just after their breakthrough performance at the Monterey Pops Festival, until Janis’ death in October, 1970. In fact, he found her dead in her motel room from a dose of very bad heroin.

Cooke wrote this book to give an insider’s view of who she was. Stories about being on the road are entertaining to say the least. For any boomer who is now over 60, this will bring back tons of memories. You will recall the people, the places, the music. For example, to escape Janis’ legendary visit to her high school reunion in Port Arthur, Texas, she and the band ditch the reunion to go hear Jerry Lee Lewis who was playing locally. She goes back stage to say “Hi” to him with her sister and several band mates, “Hi Jerry, this is my sister Laura. Isn’t she beautiful?” He says, “Not really.” 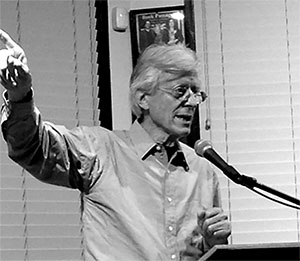 At which point she slaps him across the face and he slaps her back. A fight breaks out. Cooke manages to hustle everyone out to the car. Bobby Neuwirth who was part of this merriment commented, “Just two south Texas rednecks going at each other.”

My love of Janis began in October, 1966 when I happened upon Big Brother doing a concert in Golden Gate Park. I was mesmerized by her sound. Big Brother and Janis were on the back of a flat bed truck with no security and an audience of only 200 or so. With no one to stop me, I got up close and even managed to climb up on the back of the truck. I shot a whole role of PlusX film from 10 feet away with a 50mm lens. Amazing.

Cooke, who is Alistair Cooke’s son, is an award winning author and folk singer. He brings a gift of story telling to this wonderful book. Although, nonfiction, it reads like a novel. This book is not only a great history of Janis, but also of rock and roll in 1960s.

Cooke suggests that Janis’ career in the national spotlight, which lasted only three years, was in three phases: Big Brother; Kozmic Blues Band, and Full Tilt Boogie. She was wrapping up her final album, Pearl, when she died.

The poignant, gut wrenching Me and Bobby McGee was the last song she recorded. The day after she died Kris Kristofferson (who co-wrote the song) was in the studio listening to the songs from Pearl. When Bobby McGee came on, he left the studio and wandered the streets of LA, in tears and inconsolable. 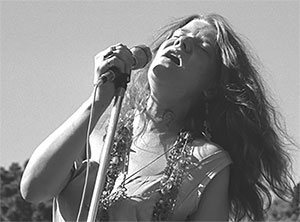 Janis’ vulnerability comes through again and again. The pain of being a misfit in Port Arthur and in high school seems to be the energy behind her passion and her ability to connect with so many people. Her pain is our pain.

When she appeared on the Dick Cavett show, he asked what it is like when she is singing. She said,

“Playing isn’t about misery or about happiness. It’s about feeling. It’s about letting yourself feel all those things you have inside you that you push aside because they don’t make for polite conversation. I close my eyes and let all those feelings come out.”

Cooke ends the book with a chapter about how he found her dead and what happened during the next few days. It is full of heartbreak and reflection. He ends the chapter and the book with this recollection:

I dreamed about Janis once, in the first year after she died. She came to say good-bye, and to seek, one last time, my blessing: In the dream I am backstage at a concert in a large auditorium. I can see neither the stage nor the audience, but I can hear Janis at her best, singing her heart out, backed by Full Tilt Boogie. When the song ends, the audience gives her a roof-raising ovation. She comes tripping down a ramp to where I am waiting, and I see in her face the same little-girl uncertainty that I have seen so many times in life. Despite the sustained applause from the auditorium, there is real concern in her voice when she asks me, “Did I do OK?”

I take her in my arms and hug her with all my strength. “You did great.”

One thought on “On the Road with Janis Joplin”