“The only alternative to being a feminist is being a masochist.”
– GS

I will have the honor of interviewing Gloria Steinem next February at Susan Page’s San Miguel Writers Conference. In preparation I’m reading Steinem’s books, and turning into a huge fan. First of all, she is a great writer. Duh. Secondly, the depth and scope of her writing is stunning.

I figured it would be interesting to see what the world’s best known feminist had to say about its best known sex goddess. Gloria did not disappoint. 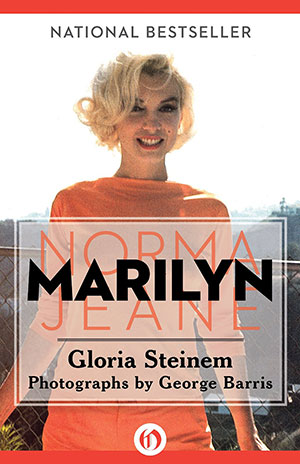 For example, Marilyn’s greatest ambition was to be taken seriously as an actor. In the movie, Don’t Bother to Knock, she was playing a scene with Ann Bancroft. Bancroft recalled: “It was so real. I really reacted to her. It brought tears to my eyes.” Guess what, MM was a hell of an actor; fulfilling her fondest dream.

A theme throughout her life was Marilyn’s empathy for the oppressed. A Los Angeles club, the Mocambo, was reluctant to hire a black singer. Marilyn called the owner, “If you hire Ella Fitzgerald, I will come every night and sit in the front row.” He did and she did. Ella reflected, “I never had to work a small jazz club again.”

This remarkable book paints a picture of Norma Jeane that is broad and deep. From her tortured childhood to her fame as an actor and sex symbol known the world over, we get to know the real person who was deeply troubled and full of self-doubt. She was also on a constant search for the education she didn’t get in her early life. Steinem notes that books by Shelley, Whitman, Keats, and Rilke “accompanied her on movie sets where she played the classic dumb blond.”

In the early parts of the book we learn about Gloria’s history as well as Marilyn’s. For example, Gloria had an abortion at 22 and told no one. She has zero regrets about that or about being childless.

Gloria’s mother was a Christian and a journalist. Her father was Jewish, and his mother had been active in the suffrage movement in the early 1900s. The apple didn’t fall far from the tree.

If you are a fan of either Marilyn or Gloria, you will enjoy this book. If you don’t care for either of them, and you read this book, I predict you’ll change your opinion.