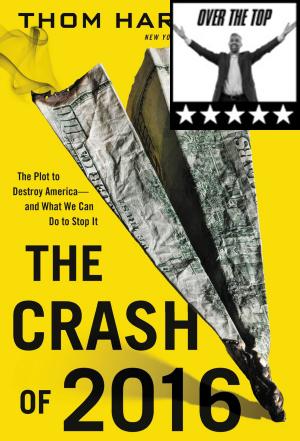 Thom Hartman makes the case that from the “Reagan Revolution” in the mid 1970s to today, the “Economic Royalists” (a term used by FDR) have been transferring the wealth of the middle class into their bank accounts.

As the middle class is being “hollowed out,” the 1% are taking more and more of the country’s resources for themselves, leaving the United States vulnerable to economic collapse and a bloody revolution. (On Netflix, check out “Assault on Wall Street.” A working guy gets totally screwed by his financial advisors and takes revenge in a bloody attack.)

My financial advisor scoffs at all this saying, “How can you trust a mere ‘radio talk show host’ with no financial credentials to have any credibility about all this?” Well, the book is tightly reasoned and well documented. So, I made a bet with him that the stock market will be down 30% by January, 2015. We’ll see.

My wife thinks I’m looney tunes when I discuss all this, what with me listening to all those commie pinko radio talk shows. I’m quick to point out that I am getting this doom and gloom from other sources as well: Paul Krugman (Nobel economist); the Wall Street Journal; the New York Times; Warren Buffet, etc. Not exactly left wing nut cases. 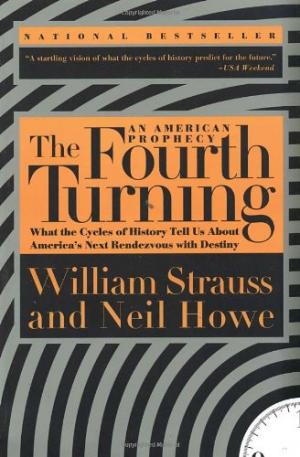 In addition, Hartman acknowledges the insights of historians William Strauss and Neil Howe in their amazing 1998 book: The Fourth Turning. The authors build a case that history unfolds in 80 year cycles broken down into four, 20 year generations. This results in “turnings.” The first turning is calm (think the Eisenhower years). In turnings two and three, things begin to unravel. In turning four all hell breaks lose with all out war. This happens because by four generations, people have forgotten the horrors of war and are ready to go kick somebody’s ass. We are now in the beginning of the Fourth Turning. 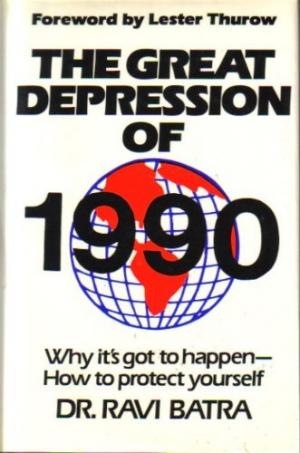 Another doom and gloom book by Ravi Batra, an economist from SMU, discussed one of the most valuable economic models I have ever encountered. (Never mind that the “great depression of 1990” never happened.) He credits his mentor, P.R. Sarkar with the idea that there are four economic classes throughout history: laborers; warriors; intellectuals; capitalists. The hierarchy looks like this: 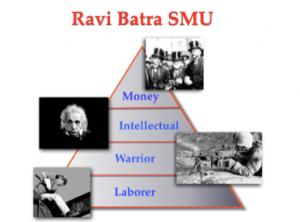 According to Batra, things work well when everyone feels they are being given a fair deal (think the post-war years). Things fall apart when the money people at the top get greedy (think 1929 and today). At that point the whole system collapses in war and chaos (Stauss and Howe’s Fourth Turning – the Great Depression and WW II) only to be rebuilt again.

The Fourth Turning and Batra’s ideas about class help to give Hartman’s thesis more credibility. So if we are on the verge of total economic and social collapse, what to do? One thing is certain, the Economic Royalists won’t voluntarily share the wealth.

Clearly Obama doesn’t have the power to effect a change. Remember when FDR threatened the Royalists to get them to pony up for the New Deal and accept a 90% tax rate, there was talk of the end of capitalism and a strong communist party and in the United States. In addition, unemployment was at 34%.

Hartman suggests many changes must happen to prevent the crash: reverse the Citizen United decision; adopt universal health care; regulate Wall Street; re-strengthen the union movement; tax the rich at a marginal tax rate of 90%; invest in alternative energy sources. You can imagine that Hartman will not be invited to address the National Republican Convention.

All of this has made me ever more skeptical of the financial systems we all depend on for our retirement. (BTW, don’t miss Public Television’s “Front Line” about how retirees are being gouged by the retirement planning industry: “The Retirement Gamble”   4/23/13)

I have “rolled over” my IRA into a bank account, and completely pulled out of the stock market, including my cherished Apple stock. Yes, I’ll pay capital gains taxes. So what? I would  pay them whenever I cash out. This way when the market tanks, at least my principle will be safe. It won’t take much. Putin invades Ukraine and the European Union falls apart. The Euro loses 50% and the next day your retirement savings drops to 50%. The people who will do just fine in all this are the 1%ters.

This plan drives my financial advisers nuts. The banksters keep advising me to buy this, that, or the other investment tool. Nope. Sorry, keeping it in my savings account and part in cash in my safe deposit box. Hell, I’d bury it in coffee cans in the back yard if I wasn’t afraid that Alzheimer’s would result in my forgetting where I put the cans.

I doubt much of this glum situation will change given our current political realities.  I would suggest you get a copy of The Crash of 2016 and figure out a strategy that works for you. I think we are in for a bumpy ride. Hope I’m wrong.