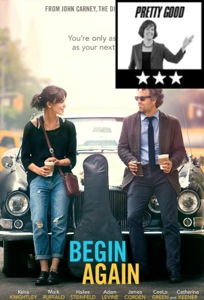 Begin Again is a mediocre movie.

• Record your music outside the studio in New York city with all the hustle and bustle including sirens, screaming kids, car horns and cops chasing you off subway platforms, and

• Skip the tight-assed, money grubbing music company and sell your new album on the internet for $1.

Sorry to say the screenplay, directing, and cinematography are so weak it just didn’t grab me, and these two themes are not enough to carry it.

Keira Knightley (Gretta) did her own singing, and it is not impressive. (Talk to George Clooney who thought he could do his own singing in Oh Brother Where Art Thou, only to be shocked  that dubbing in Ralph Stanley made all the difference.)

Additionally, the music is not that interesting.

As usual, Hollywood can’t stand the idea of breaking up the family. So Dan, the “depressed, self-centered asshole” (his description) whose life and career are rejuvenated by recording this new album, is obliged to return to his suburban home and family. Gretta who has left her old boyfriend wanders off to find her future alone. This reminds me of Gloria; the older man returns to his family leaving her to find her way on her own. The difference is Gloria is a terrific, engaging story.

I am a huge Mark Ruffalo fan mostly because his portrayal of the detective in Collateral was spectacular. He is getting cast recently as a bit of a schlemile  and it is too bad (See The Kids Are All Right). He is at his best in Begin Again when he gets righteously angry.

All said, though, I can’t strongly recommend this movie. It is just OK.