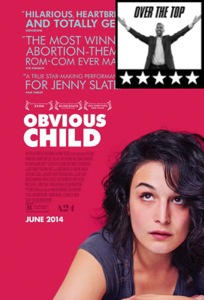 Do you know anyone who has had an abortion? Of course you do. You may have had one yourself. If so, hopefully, it was post-Roe v. Wade, so it was safe and legal.

Let’s be clear, no one is “pro-abortion.” The choice to end an unwanted pregnancy is a gut-wrenching decision that can have life-long consequences. The procedure itself, while safe, can be traumatic. The questions is, should a woman have the right to terminate a pregnancy.

The new movie, Obvious Child, answers that question with a resounding “Yes.” (I’m about to tell you how the movie ends. If you don’t like to know the end of movies, and you plan to see Obvious Child, stop reading here.)

I am so enthusiastic about this film because it treats this serious issue with deep respect. The protagonist, Donna Stern, is a lost stand up comic who gets pregnant after a drunken one night stand.

She is very clear about ending the unwanted pregnancy. The support she gets from her family and friends is deeply touching. One scene I especially liked is when she tearfully gets in bed with her mother for support. Mom explains that having an abortion is the right thing to do. Furthermore, she admits to Donna that in college she had an abortion – before Roe v. Wade. It was on top of a table in a dirty apartment in New Jersey.

In contrast as we follow Donna through her journey, we see a Planned Parenthood clinic staff dealing with her in a professional and supportive way. We even see Donna’s face during the abortion and hear the voice of the physician who is performing the abortion reassuring her about what is happening.

What is also refreshing is the role of Max, the father in this movie. Portrayed as a slightly clueless business school student, he steps up to the plate and completely supports Donna through the procedure. In the final scene, they are sitting on the coach in his apartment, post-abortion, watching Gone With the Wind.

Another highlight of this terrific movie is the use of Paul Simon’s song “Obvious Child” with its refrain, “the cross is in the ball park.” Which, according the internet means, “we can solve our own problems.” Whatever.

Hollywood film makers, for all their reputations  as left wing destroyers of western civilization, have been complete whips on this issue. Juno and Knocked Up were horrible movies just because they portray teen pregnancy as light and funny, and of course “we’ll have the baby.” In one movie they couldn’t even say the word “abortion.” Instead they talk about having a “shmashmortion.” Pathetic.

This is not surprising since in 1956, the Motion Picture Production Code declared:

In the current train wreck of political debate around women’s health, birth control, and abortion we are hurtling back to the bad old 1950s. Politicians step in it with comments like “legitimate rape” and “God wanted it.” Courageous Texas state senator Wendy Davis gets called “Abortion Barbie” by the wing- nut far right. I applaud Obvious Child for helping to balance the debate.

P.S. We have always supported Planned Parenthood. A few years ago, my then 17 y/o daughter, Katy, and I went to hear PP president, Cecile Richards speak in San Francisco. Afterwards, Katy introduced herself to Cecile and they had a five minute conversation about Katy’s emerging sexuality.

P.P.S. To learn more about the abortion issue and my relationship with Norma McCorvey, the Jane Roe of Roe v. Wade, see my essay “Brushes With Fame.”