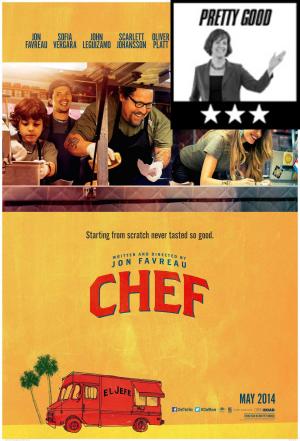 What a delightful movie. If you’re a foodie, don’t miss this one. It is loaded with food humor and cooking lingo. It is about so many things all at once: Taking pride in what cooking is all about; the chef trying to regain his identity; his son seeking to find his father and himself; and a man’s search for independence.

BYW don’t go hungry. By the end you’ll be starving for a fat-filled, artery-clogging, cholesterol-dripping, mouth-watering food truck sandwich and you’ll be frustrated there won’t be one outside the theater.

Suffocating under a high-end LA restaurant owner (Dustin Hoffman), the chef (Jon Favreau – writer and director) tells a famous LA food critic to go hell, and gets fired. He then finds himself in a refurbished food truck, El Jefe Cubanos, on a cross-country adventure to rebuild his relationship with his son and find himself. The music is great. The writing and dialogue move the story along, and it never for one second feels too long.

One highlight of this feel good romp is the use of technology which, of course, the son understands and the dad is clueless about. The dad begins tweeting and texting his angry feelings about the critic not realizing it is going viral. Meanwhile, the son uses Twitter to create huge lines of people waiting as the truck goes from city to city.