An addition to Listen Deeply, Chapter 7: Fear. Retired Rear Admiral Winston Copeland recalls the terror he felt as a fighter pilot over Vietnam one dark November night when all his instruments lights blew out. He told God he’d go to church every Sunday if he could survive this one.

On a long stretch of highway between Novato and Vallejo on Highway 37 rests a dilapidated fishing boat called the Edith-E. Her final resting place is in a field of ice plant. Portholes have been stolen. The deck and sides are riddled with holes. Her rough and rowdy days as a fishing boat in San Francisco Bay are a distant memory. Like the proud old high school quarterback star, now reclining in a nursing home, Edith-E has a story to tell.

At least that is what I imagined every time I passed her on my way to and from Lake Tahoe. A few years ago I stopped to photograph this proud old maritime senior citizen. On one of my subsequent trips to the lake, I decided to stop at the boat yard near the entrance to the Petaluma river and let them know about these amazing photos I’d taken and see what her story is. There were two grizzled old men working at the Mira Monte Marina the day of my visit. 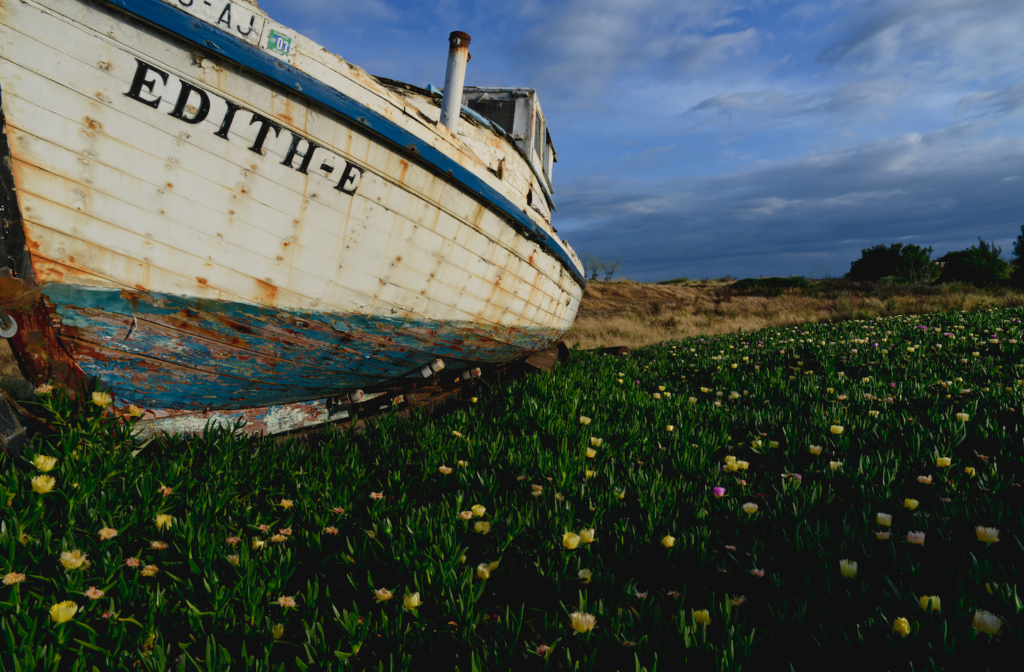 Little did they know about the astonishing photos they were about to see taken by a world-class photographer from Redwood City. They politely listened to my story and the AMAZING offer I was making them of large, 11X14 prints of the boat for the wall of their shop.

When I finished, they began snickering, then guffawing. Wha? What’s so funny? They told me that about once a week some other world-class photographer stops by with the exact same story. So, thanks, but no thanks. Guess Highway 37 attracts a lot of world-class photographers like me. Tail between my legs, I thanked them and returned to my car. Driving off toward Vallejo, I thought, “Maybe I’m not a world-class photographer after all,  or maybe this story is simply not that interesting. Just an old piece of shit fishing boat rotting away in a field of ice plant. BFD.”

I suggested at the end of my blog that the boat had been placed there by aliens – you know, like crop circles, the Loc Ness monster, and UFOs. End of story.

Then the damndest thing happened. Two weeks ago, I got an email from a sailor named Scott. He said he had been an owner of the Edith-E and had seen my story on the Internet. Was I  interested in more information? Interested? Are you kidding? Scott and I had a long phone call a few days later. He sent me a trove of maritime information about this beautiful senior citizen of the San Francisco Bay. 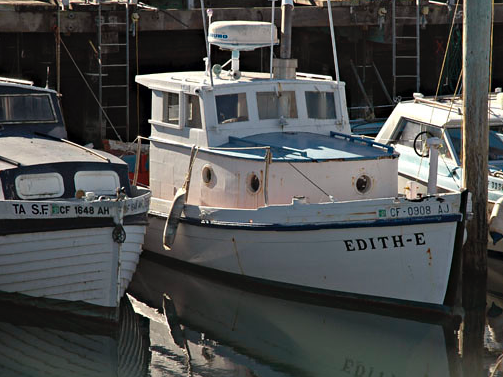 The Edith-E was built in 1934 in Sausalito at the Nunes Brothers Shipyard (1860 – 1950). Who owned it originally and its story as a fishing boat has been lost in history. It was common in those days (still today, maybe) that boat builders name their boats for the women in their lives: mother; daughter; wife, etc. Wonder who Edith was?

Scott and his friend Gary wanted a boat they could use around the delta for pleasure cruises. They both knew about boats and didn’t mind one that needed some work.

After searching around they finally found a boat at Fisherman’s Warf that the harbor master was eager to get rid of. They could have the boat FOR FREE. Come and get her. 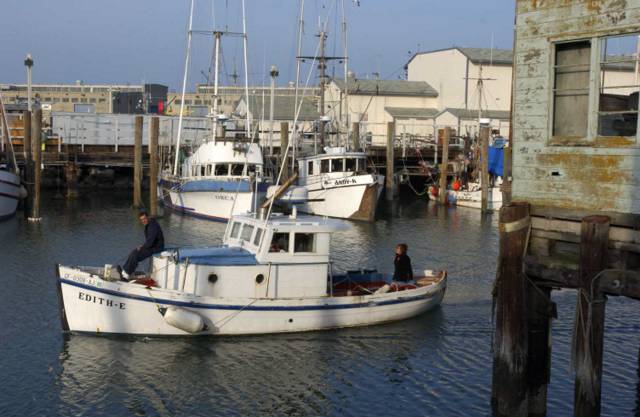 Scott explained that the Edith-E is a type of boat called a Monterey Clipper. Very popular as small fishing boats in the Bay up until about the 1950s when larger boats took over. This style of boat was originally built by fishermen in the Mediterranean Sea, mostly Greeks and Italians. What made them so successful in the Bay was the shape of their hulls. They could easily cut through choppy waters and not be bounced around like a cork. I can only imagine what kind of fishing career the Edith-E had before ending up at Fisherman’s Warf.

Scott and his partner got the boat up to the Petaluma river where they used it for several years for pleasure cruises. It soon became clear that to keep it going would require more money and time than they wanted to invest. So they, in turn, gave it away to another boating enthusiast who kept it for a while, then abandoned it.

She then sat idle at the Mira Monte Marina for years. Finally, the marina owners had had enough and wanted to get rid of her. They packed her up on a trailer to haul her away to the equivalent of the old horses’ “glue factory.” Because the boat was so heavy with its diesel engine and being waterlogged, after some distance, the trailer broke in half. The crew said, “Oh to hell with it.” They left her where she rests today. 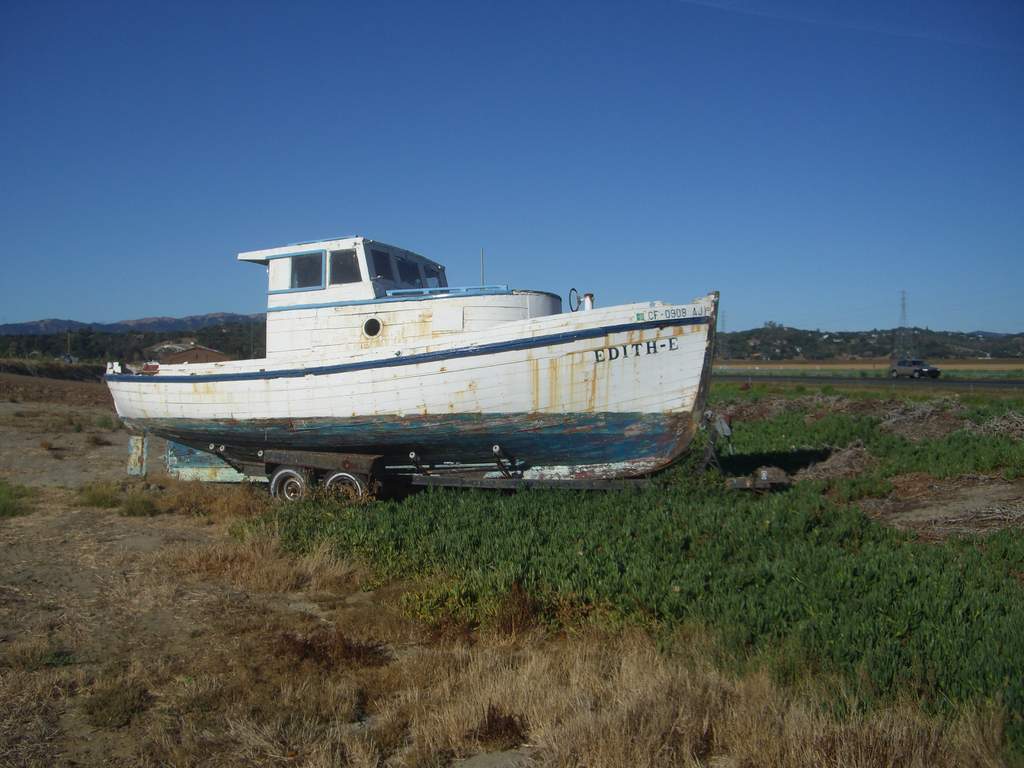 She was born in 1934. I was born in 1939. In her adolescence and adult years, she kicked ass as a powerful fishing boat on the Bay making a living for someone who was married (probably) to a woman named Edith. In my early years and the decades of my productive adult years, I ran around the Bay as a psychologist, small business owner, and corporate trainer. I too, kicked ass in my heyday. Now Edith-E reposes on her bed of ice plant, and I recline in my red easy chair reading the paper and writing my blog.

I found myself saying a silent prayer to Edith-E, “Don’t worry, Honey, you are not going to die alone and forgotten in the ice plant on a lonely stretch of highway.” Quickly it dawned on me that my prayer was for me as much as for Edith-E. “Don’t worry, Rick, you are not going to die in some lonely stretch of Harrison Ave. in Redwood City, digging weeds in your garden.” No, no. I find that writing the story of this old boat, not only brings a dignified end to her, but to me as the writer. We both go out in a blaze of glory.

The end is near for each of us, but I think Edith-E might agree with me that it has been a hell of ride. No idea how long she will stay there off Highway 37 or how long I’ll stay in my easy chair. But one thing is certain, the next time I’m heading for Tahoe, I’ll stop by and say  “Hi” to Edith-E.

Maybe even take some more photos.

If, one day on your travels, you stop by,  please say “Hi” to her for me. We are kindred spirits. 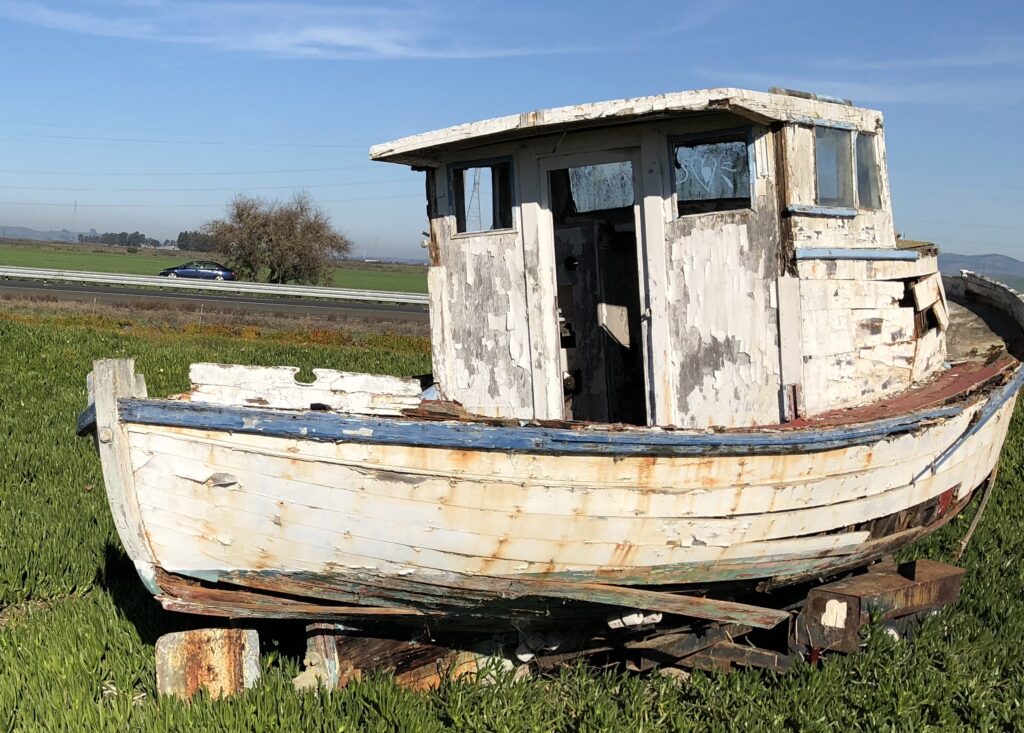