Clearly, I Just Don’t Get It

At our class reunion, I ran into an old friend who I’ll call Bob. To my dismay, he was wearing a Trump MAGA hat. Our conversation made it clear how clueless I really am. 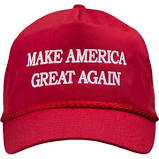 Bob: Bigger question is, ‘Why aren’t you wearing one?’ He will take us back to better days when coal was king, women knew their place, and we could tell brown people to stay out of our country and go back to where they came from.

RG: Oh, (trying to be open and nonjudgmental) What is Trump doing you that like?

Bob: First of all, he is giving us “tax relief.” What that means is he is doing “income redistribution” from the middle class to the top 1%. That will bring us more jobs.

RG: Oh, I see. He wants to make the super-rich even richer on the backs of the poor and the middle class?

Bob: Don’t be a smart ass. In fact, numbnuts, that is called “trickle-down economics.” It creates a bigger pie for everyone. You know, “a rising tide lifts all boats.” This is the glorious legacy of Saint Ronald Reagan.

RG: But I thought that economic strategy just put more money in the offshore accounts of the ruling elite. I don’t understand why you hate taxes so much. You want to reduce taxes to zero? What kind of a country would that be? It was Supreme Court Justice Oliver Wendell Holmes who said: “Taxes are the price we pay for a civilized society.”

Historically, when you cut taxes on the wealthy they do not create more jobs or build more factories. They keep the money.

Bob: Jesus, you have been brainwashed by Rachel Maddow and those commies on MSNBC. Here is my prescription for your dumb thinking: “Watch Sean Hannity on Fox.” He’ll straighten out your misunderstanding of how the world works.

RG: (non-defensively) OK. What else do you like about King Trump?

Bob: He uses Twitter to drain the swamp. He hates politically correct language. He will let us say “Merry Christmas” again. I love how he insults people, “Rocket Man,” “Crooked Hillary,” “Lyin’ Ted.”

He will show these immigrants who’s boss. He’ll build a wall. He will also keep out those pro-ISIS Muslims. He hits back hard when he’s attacked. We need to go back to the time when John Wayne stood for what makes this country great.

RG: I see where you are coming from. Bet you were disappointed he couldn’t get the “repeal Obamacare” through Congress.

Bob: Are you kidding? Those so-called “middle of the road” Republicans like John McCain and Susan Collins who voted against repeal, are just as bad as Chuck Schumer and Nancy Pelosi. They’re a bunch of left-wing, America-hating, atheistic anti-capitalist traitors. They should be locked up just like Hillary. They want to make health care a “right” not a privilege. Who the hell is going to pay for all this free healthcare? I’ll tell you who, ME!

With sky-high insurance premiums, you get good coverage. If you can’t afford it, too damn bad. Poor people are a drain on our society. Why the hell is their ‘pre-existing condition’ my problem? If they can’t afford healthcare insurance, too bad. Who cares? They can die in the gutter.

RG: Oh my, Bob, that is harsh. I thought you were a Christian. Jesus said we should be “our brothers’ keepers.” Besides that, if we had “socialized medicine,” like most of the other advanced countries, we would no longer put our “insurance premium” money into the pockets of the shareholders and the over-paid executives of these rip-off insurance companies. We still would pay that money in taxes, but it would go toward healthcare costs, like Medicare.

Bob: How could you be so misinformed? Have you not heard about the wait time in Canada and Britain? Weeks or months. Hell, Canadians are streaming over the border to get good old American pay-for-service, free-market healthcare.

RG: Bob, I know you have two daughters with professional jobs. Surely Trump’s attitude toward women and sexual harassment gives you pause.

Bob: Pause? No way. So he grabs women by their genitals, BFD. Look, he is rich and famous, so they let him do it. Boys will be boys. I can’t see what the big deal is.

Boy, Rick, you are such a mushy, soft-in-the-head liberal.  Bet you went to one of those tax-supported state colleges.

RG: Well, now that you mention it, I went to San Frans…

Bob:
(interrupting) Oh never mind. Look, we’re just going to have to agree to disagree. Clearly, your thinking is muddled. You are on the wrong side of history. And, oh, by the way, YES, some Nazis are good people, and Robert E. Lee was a great man. One more thing. When we have these mass shootings, let’s be clear. It is never about gun control. It is always about mental health. My man Trump sends his thoughts and prayers. What more can you do? Remember, it is in God’s hands. I hope you get in touch with reality one of these days.

RG: (ironic, mocking tone) Guess you are right, Bob. I just don’t get it. You see, I was thinking we should repeal the Second Amendment. Piss-poor education, I guess. I’m going to enroll in Trump University to learn about capitalism, God, and class warfare. At our next reunion, I’ll show you what I’ve learned. Oh, by the way, can I borrow your hat?

6 thoughts on “Politics At The High School Reunion”