Martin Luther King was coming to the end of his prepared speech on August 28, 1963 when gospel singer Mahalia Jackson, sitting just 10 feet away, yelled ‘Tell ’em about the dream, Martin.’ 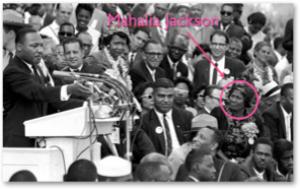 Dr. King put his notes aside, looked up, and delivered what is surely the most impactful speech of the 20th Century. The power of his rhetoric, the poetic images, and the repetition, galvanized the Civil Rights Movement and changed the course of American history. Later when King was ushered into the Oval Office to meet the president, Kennedy greeted him with, ‘I have a dream.’

In business, too often we trade passion for control. We stick to our PowerPoint slides at the cost of spontaneity. The next time you’re in a high-stakes decision meeting, be open to sudden changes. Be willing to dump your slides. Listen to the voice of Mahalia Jackson yelling in your ear, ‘Tell ’em about that customer success, Bob!’ Put aside your slides and “let ‘er rip.” You might just change the future of your company.