The new east span of the Bay Bridge

After watching this bridge take shape for the past five years, last Saturday night we crossed it for the first time at 11PM. It was a spiritual experience. Totally other worldly. The contrast from the old Bay Bridge, opened in 1936, was unbelievable. It was a leap of 100 years, almost.

I thought someone put LSD in my drink. I  wanted to stop the car, walk around and take photos all night. The best we got was this iPhone photo through the windshield at 60 mph.

In September, 2009 when the bridge was closed for engineering changes in the long process of building the new bridge, I rented a helicopter to get photos of the Bay Bridge without traffic. 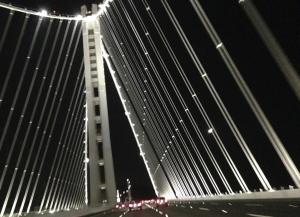 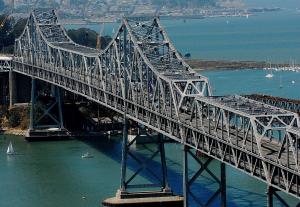 The dismantling of the old bridge, which is starting now, will be a very dodgy proposition. It will come down literally one piece at a time. Because of the cantilever construction, all parts are under enormous stress. One misstep and whole bridge could explode. Let’s watch this process carefully and wish the demolition team good luck.

One thought on “A Bridge to the 21st. Century”