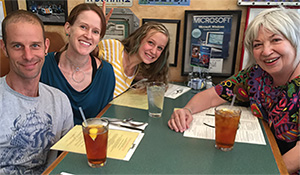 I am surprised how hard Robert Fish’s death has hit me. Like losing a brother. We had a remembrance for him at our home for friends and relatives. Stories, tears, and laughter flowed. Robert’s wife, Lynette, son Alex and his friend Kelly, and Robert’s granddaughter, Sylvia, stayed with us over the weekend.

What struck me about the stories we heard was how much more there was to Robert than I knew. He was quite the prankster. He was also a rock for Alex who went through a troubled adolescence and early adulthood.

I asked Alex to tell the story on video. What emerges is how Robert moved beyond the upright, rigid emotional world of his WASP family to a person who accepted Alex and gave him unconditional love. What Alex got from Robert he is now passing on to Sylvia. It is an amazing story:

To see more about Robert: