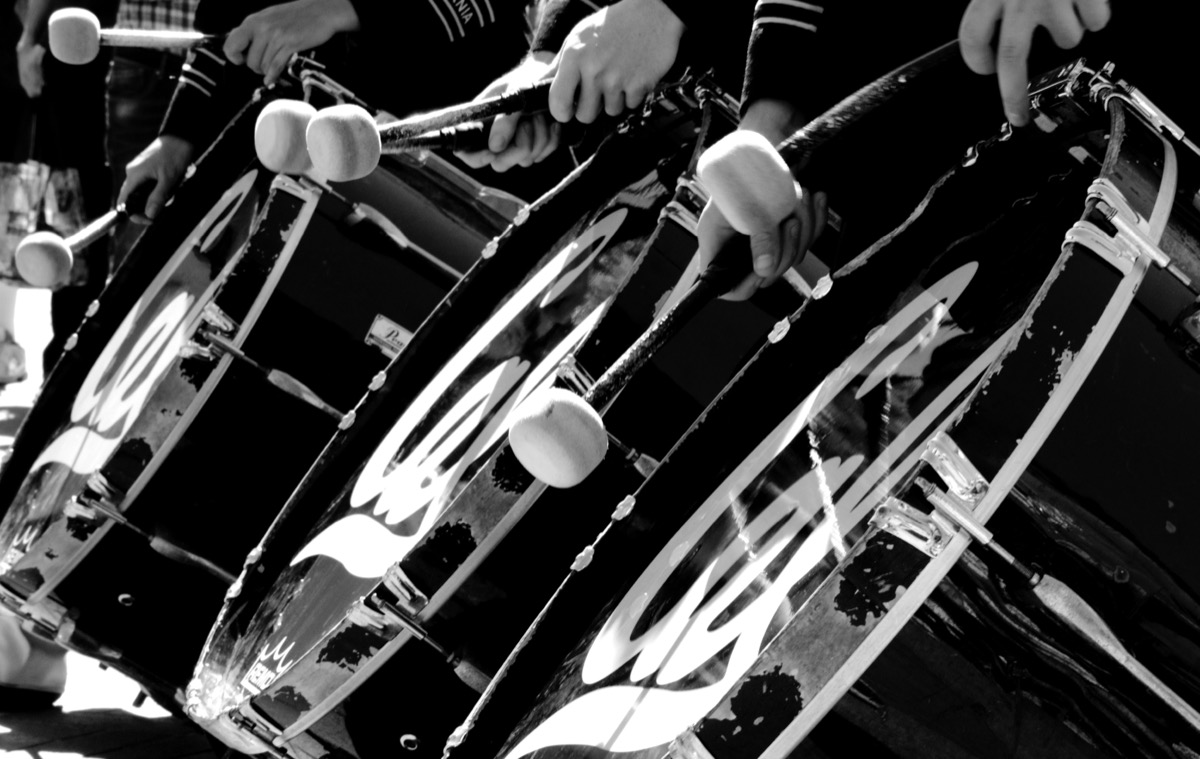 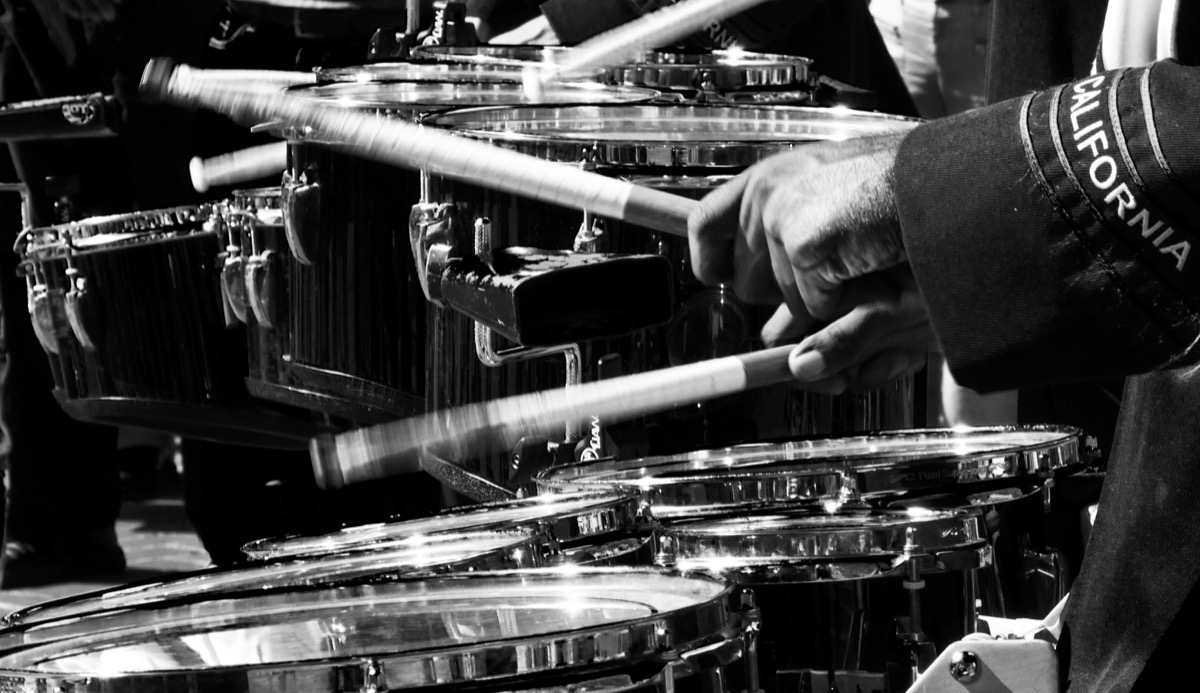 Drums pounding, cymbals crashing. You’d think we were marching off to war. 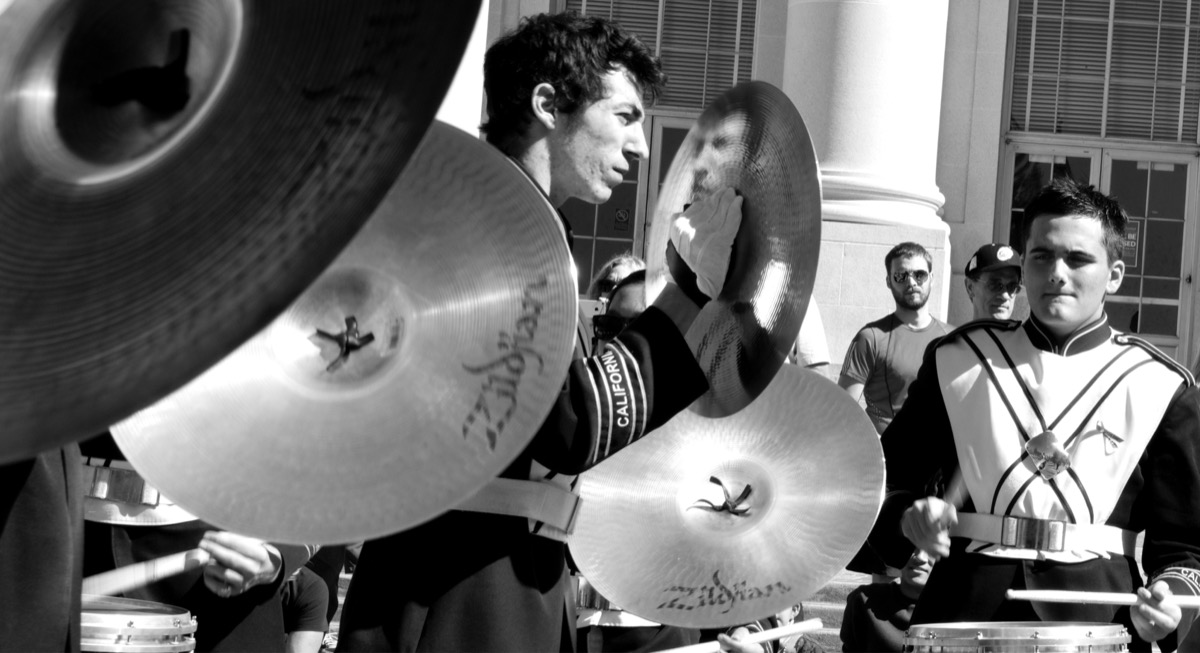 The cheerleaders got us all fired up… 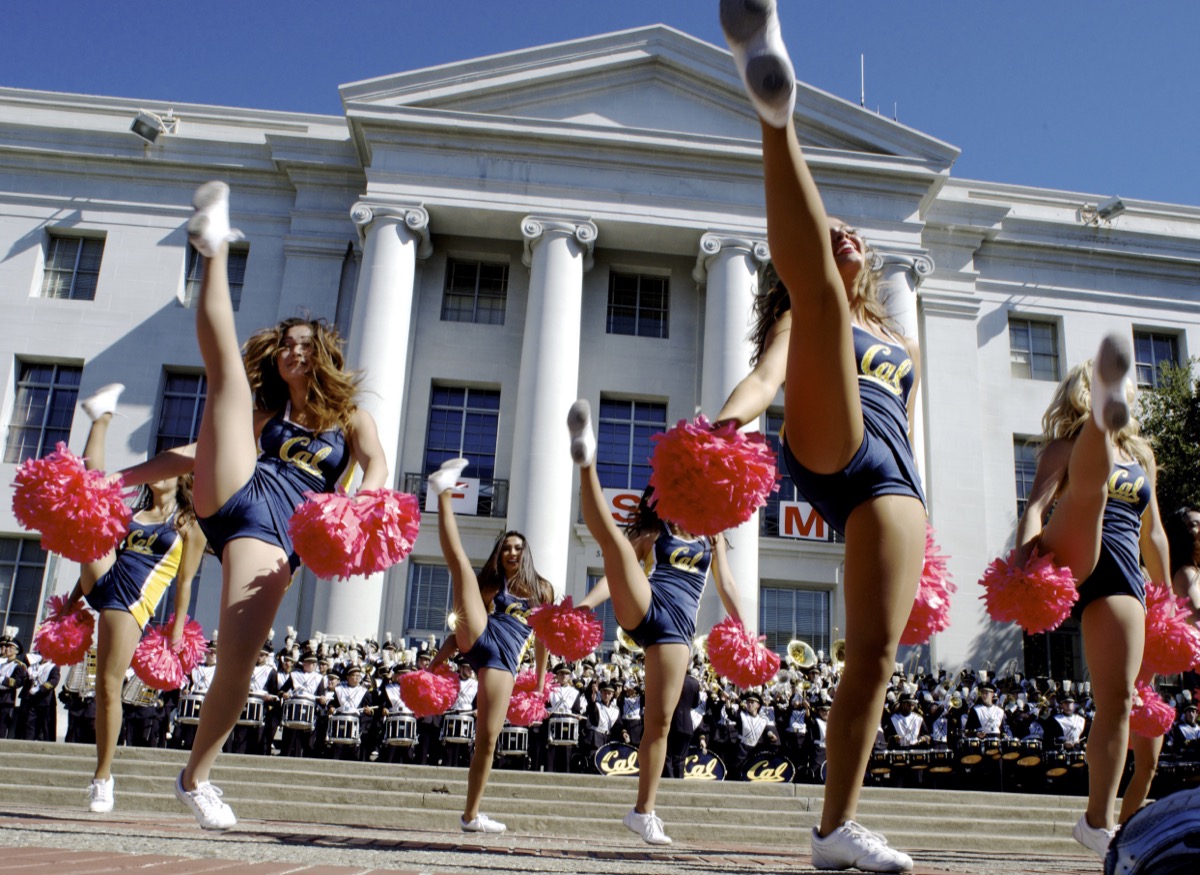 It’s all about the hair

I was taking photos of all this pandemonium when a person standing next me, noticing my camera with the long lens, pointed to one of the drummers and said, “That’s my son, Vivek. He’s a freshman.” I said, “I’ll take some photos of him. Give me your card and I’ll send you a few.” 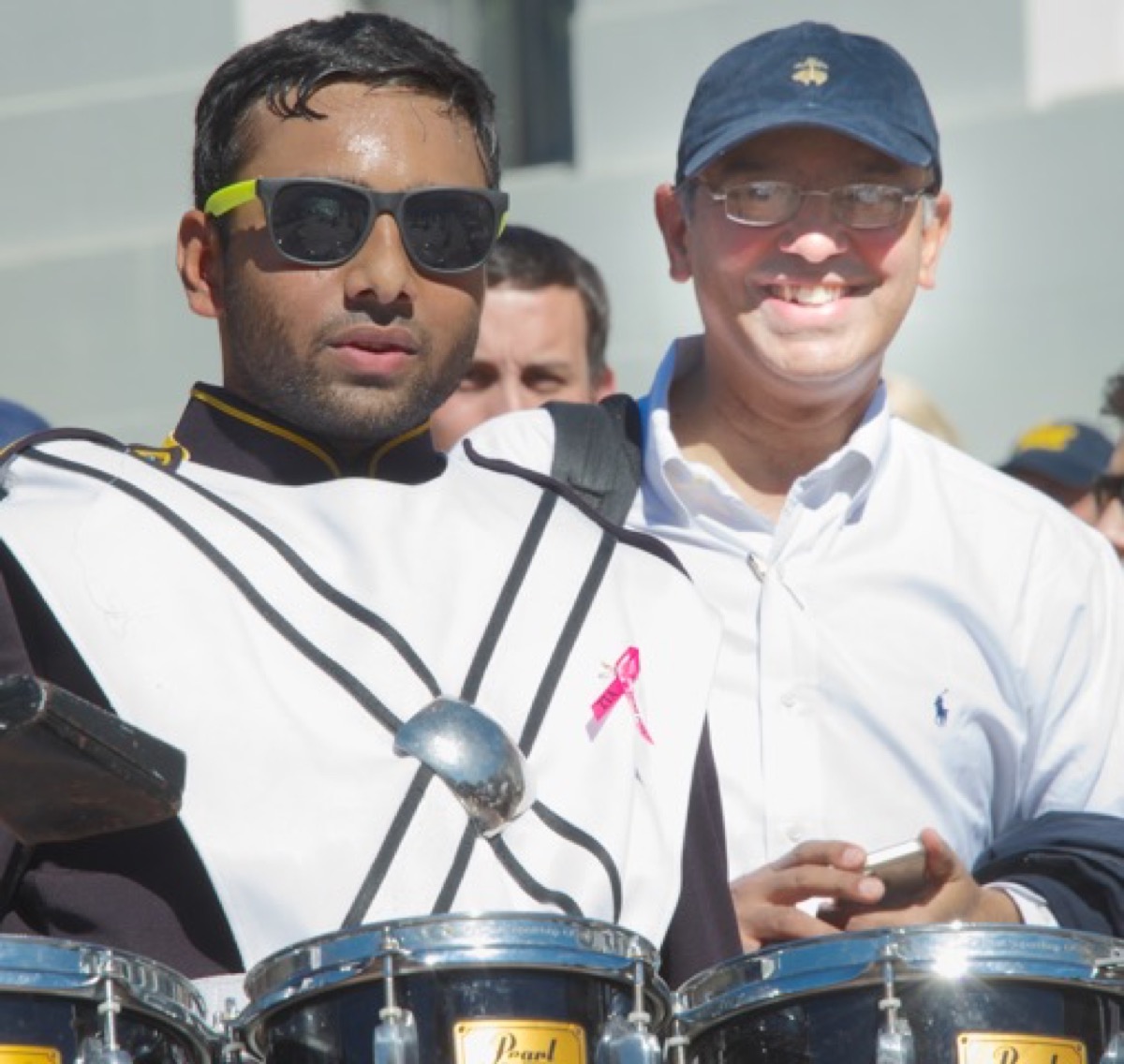 Then I suggested, “Go stand next to him.” The proud father quickly moved through the crowd to be near his son.

A moment later, I noticed the band director, Robert Calonico, talking to Vivek. I wondered what he was saying to this freshman drummer. Was he giving praise or criticism? Encouragement or correction? Mentorship early in life can have a monumental effect on who we become. 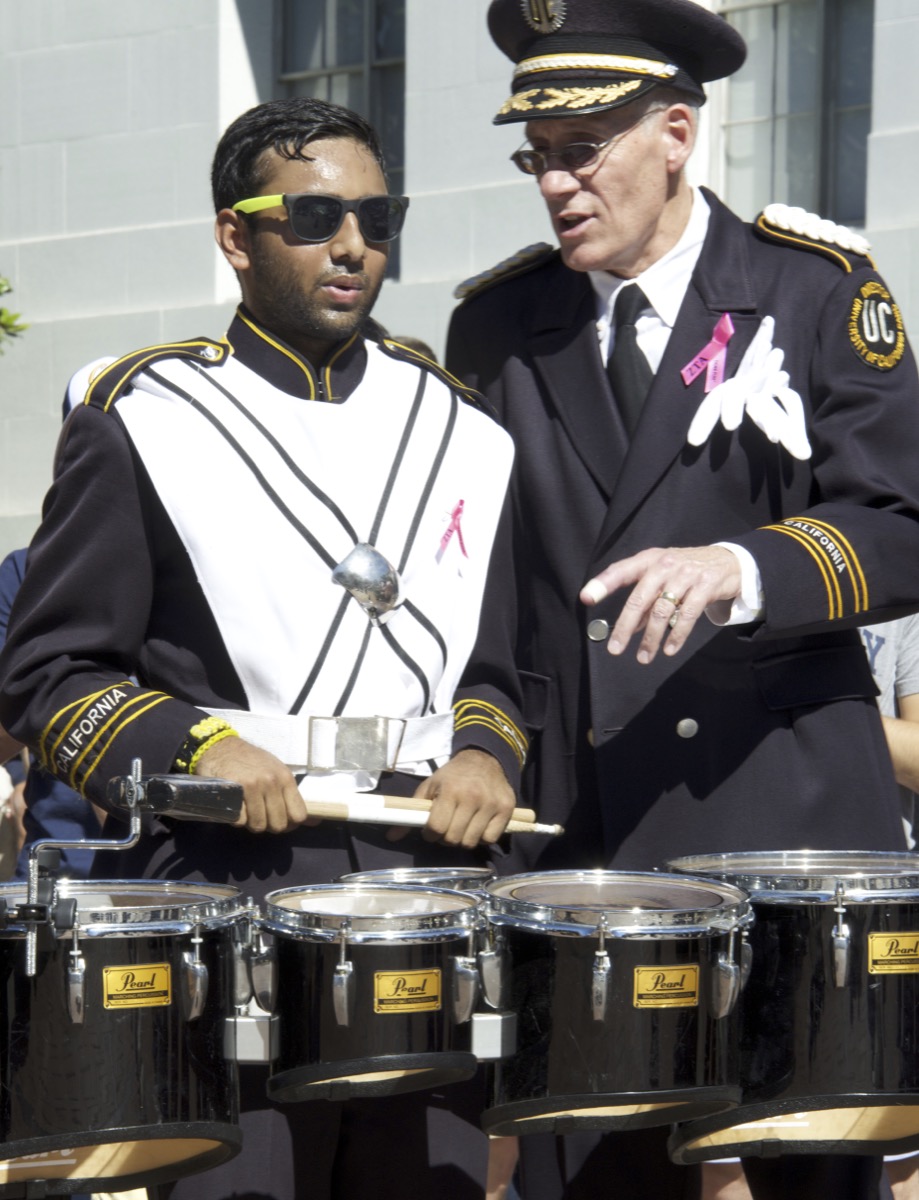 Later, I talked to Vivek about all this. Coming to a large research university like Berkeley, he said, “I never expected to get to know any of my professors, but Bob Calonico is different. He is very popular, connects personally with students, and encourages us to call him ‘Bob.'” I asked Vivek what Bob said to him that day. Bob told him, “Remember we are putting on a show for these people. Smile.”

To get more details on this, I called Bob. I asked what he said to Vivek. Was it something profound and life changing? Bob started laughing, “Oh God no. I was teasing him, ‘You really love this, don’t you?'” Bob went on, “They often look like they are going for a root canal. They call it their ‘game face.’ I want them to lighten up. I like to razz them.”

Bob told me that most of these players are majoring in computer science, engineering, or math. This helps them use the right side of their brains. One musician told him, “Bob I come out here and blow my brains out for an hour so I can go back and study for four hours.”

Bob went on, “I love working with these young people. It helps to keep me young.” It’s obvious why he is so well liked by the students.

Meanwhile, I learned that Vivek’s father,  Mohan Mysore, is director of pediatric critical care and a professor of pediatrics at the University of Nebraska in Omaha. You never know who you’ll meet when you have a camera. I emailed him photos and received an appreciative note back. Mohan had visited the PowerSpeaking web page and explained that Vivek was ranked 6th nationally in Original Oratory by the National Forensics League. What an amazing connection!

Lessons learned
: take your camera with you, and be open to where photography will lead you. As Nevada Weir suggested: it is not about the picture. It is about the relationship. http://rickgilbert.net/#1593. 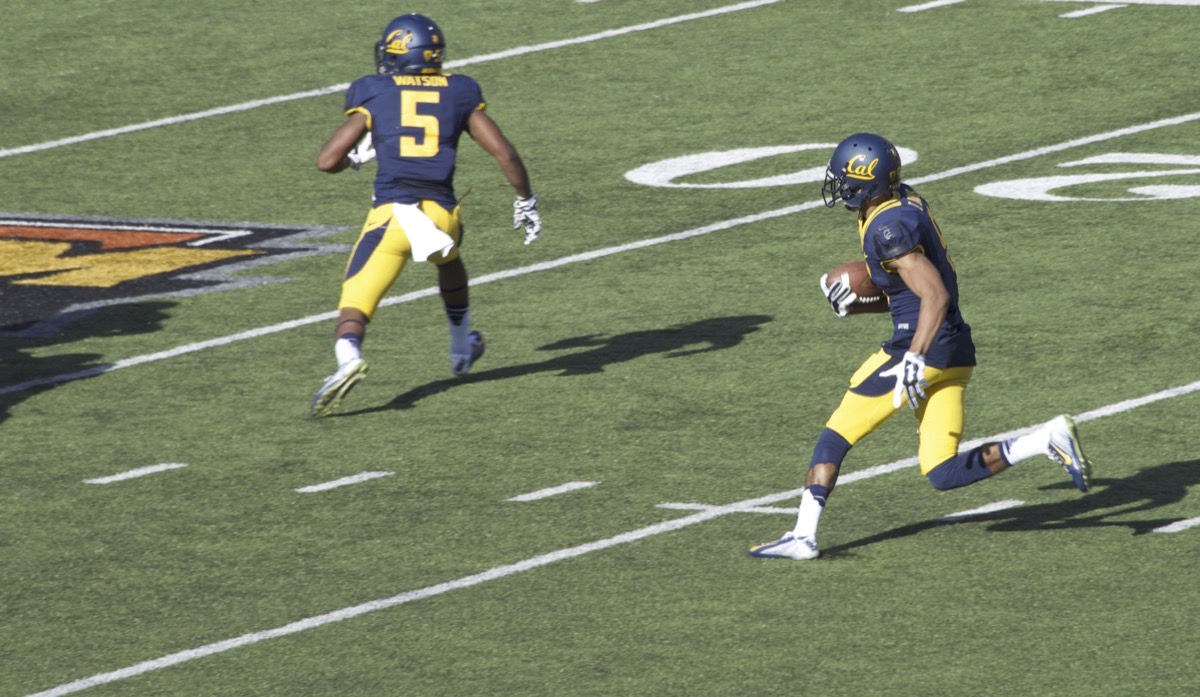 * Notice the letters up on Sproul Hall behind the cheerleaders: FSM. 2014 is the 50th anniversary of the Free Speech Movement which closed down the university. Ironically, now they celebrate it.

4 thoughts on “Photography: The Shortest Distance Between Two Hearts”