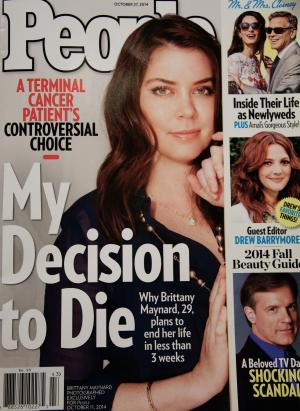 I disdain People Magazine. I disdain celebrity gossip. You will never see a copy of People Magazine on my nightstand… until now. The current issue, October 27, features a cover story of “Death With Dignity,” an issue I care deeply about.

The story is about  29 year old Brittany Maynard who has decided to end her life because of an aggressive brain tumor that is killing her. There is no hope. Her immediate future is painful and gruesome. Supported by her husband and parents, she moved to Oregon, a state that will allow her to end her life on her own terms, gracefully and humanely. 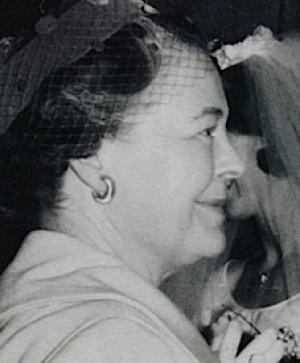 When I was 26, my mother committed suicide as her body was being destroyed by multiple cancers. I respected her for that decision. That was the beginning of my support for this issue. The cover of the magazine calls Brittany’s decision “controversial.” I don’t  see it that way. If a person is clearheaded and wants to end their life because of some horrific illness and suffering, why is that “controversial?” Of course the decision should be subject to legal and medical review.

“Right to Die” is an issue that is supported by 76% of our population, from far right to far left. The politicians are so afraid of the church (many denominations, but especially the Catholic church) that they refuse to address the issue. Many states besides Oregon, however, are moving forward with their own legislation.

The religious right argues that “only God can take a life.” The irony here is that these are the same people who support capital punishment!

Here is an idea: if a person feels that way, then they should not  do it. He or she can suffer to the bitter end, draining their family’s savings to prolong a painful life. Perhaps their God will reward them for this heroic  decision with eternal life. I doubt it. In the meantime, I deeply resent other peoples’ religious beliefs preventing me from deciding how and when I end my life.

By the time you reach my age, 75, you have seen a lot of dying among family and friends. I have seen plenty. It has all been miserable. It is about time we embrace the ultimate freedom: the right to decide when to end our lives.

If you agree with me (or if you don’t), buy the October 27 issue of People Magazine, and donate to Compassion and Choices:https://www.compassionandchoices.org.

I salute People Magazine for bringing this issue into the public discourse.

2 thoughts on “Hooray for People Magazine!”