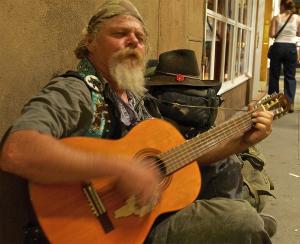 Recently I attended a workshop on portrait photography in Santa Fe, NM. The instructor, Nevada Wier, urged us not to use telephoto lenses. “Use a shorter lens, like 50mm. Be up close. Get to know people. Portraiture is about  human relationships,” she told us.

On the third day of the workshop, we had an assignment to go downtown and get some portraits. Determined to connect personally, I walked up to this street musician and put $5 in his guitar case. He was delighted and asked what song I’d like to hear. I said “Folsom Prison Blues.”

As he played and sang, I joined in and began dancing next to him, belting it out: “I hear the train a-comin’; it’s  rollin’ ’round the bend; and I ain’t seen the sunshine since I don’t know when.” Then I asked if I could take his picture. He said “Sure.” I shot about 10 images, thanked him and started on my way.

I was 20 feet away when two shaggy looking street girls of about 13 or 14 approached him and asked if he had a smoke. He gave them  cigaretts, then reached into his guitar case and handed them the $5 I had just given him. He said, “Here, you need this more than I do.” 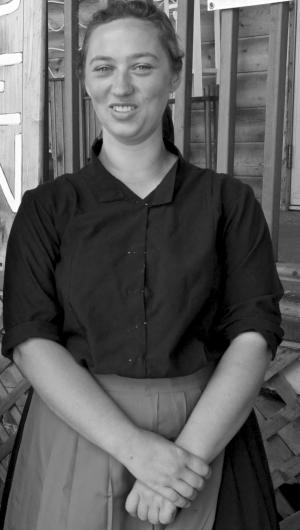 Attending a McGlynn reunion in rural Wisconsin, I was coming out of a diner after breakfast when I saw an Amish woman selling her canned goods. I thought she’d make a good portrait. I recalled Nevada’s advice, so I began talking with her, “How do you do canning without electricity? Do you sell mostly to tourists or to locals?” The conversation went on. Thinking she had not seen movies, I asked if she knew the movie, “Witness,” about an Amish community. She had not seen it, but knew about it.

I then asked if she knew about the killings in 2006 of five Amish girls in Pennsylvania by a distraut milk truck driver. She said “Yes” and told me they remember the five girls every Sunday in church. They sing a song that features the name of each girl.  I asked if she would sing it for me. She nodded. I leaned in close. She began singing in low tones a song of such passion and sorrow, it sent chills down my spine.

I asked if I could take her picture. She hesitated, “Well, we’re not supposed to.” That is not, “No.” I gently persisted. She finally agreed. The point was not the photo, it was an amazing moment with a person who had been a stranger, but through our conversation and her song, became a friend. Thanks, Nevada. 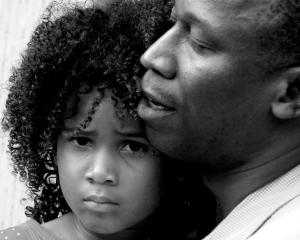 During the 2009 Monterey Jazz Festival, I noticed this sad looking girl. Ignoring Nevada’s advice, I pulled out my 200mm lens and got this amazing shot. I knew instantly it was good, so during  intermission, I introduced myself to the father and showed him the image. I offered to send him copy. He gave me his address.

During our brief exchange, he explained he’d brought her to the MJF in the hopes of sparking her interest in jazz. Apparently the plan failed. He later thanked me for the framed photo.

Golden Gate Park, October 23, 1966. I had my first SLR camera, purchased that day. Walking in the park looking for things to photograph, I heard rock and roll coming from the meadow a few hundred yards away. As if hypnotized by the Sirens of Greek mythology, I was irresistibly drawn to the sound. Here was a band on the back of a flatbed truck with this gravel voiced, tear-your-guts-out singer.

With only a few hundred in the audience and no security in sight, I scrambled up on the back of the truck and shot an entire roll of film. I could get close to Janis because she was not yet famous. Nevada would have been proud of me. I shot all this with a 50mm lens. I didn’t get to meet Janis, but I did meet her family.

In 2000, I placed an ad for prints of my photos on eBay. Within hours, I had an email from Janis’ brother, Michael. He wanted to buy the negatives. I said “No.”

A few months later, though, he and his sister, Laura, bought three of my prints.  I met them in a hotel room in San Francisco to give them the photos.

I said to Michael, “So, what is it like having a career managing the estate of your dead sister?” He acknowledged it is weird. He said, “I was a misfit hippy high school kid when she died. Suddenly I was thrown onto the world stage. Every famous person you know in rock and roll from Paul McCartney on down has been to my house and many are personal friends.” Wow. Through photography, I met Janis Joplin’s family. 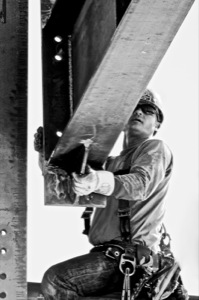 I had been shooting from the sidewalk as the building went up. I made friends with a couple of the Iron Workers. One told me that a few days earlier Rene had his leg crushed by an incoming beam. I asked what Rene looked like and sorted through my 1,000 photos to see if I could find him. 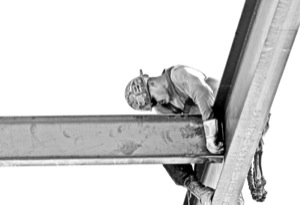 Sure enough, two of my best shots were of Rene. I made 11X14 prints of these two images, matted them, and wrapped them in clear plastic. I gave them to one of the workers who said he’d give them to Rene. Three days later when I was again photographing the building, one of the workers told me when he gave Rene the prints, he started sobbing. 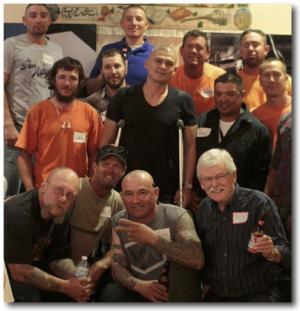 By the Iron Workers reception on August 14, Rene could get around on crutches. When he unexpectedly hobbled through the door, a roar went up you could hear for blocks. We greeted each other with a warm embrace. Suddenly a man I’d never met was a new friend. Photography made that happen. I’ll never forget Rene.

You may have a large Digital Single Lens Reflex (DSLR) camera, or one of the handy mid-size point and shoots, or you may have a smart phone that takes great photos. There is an old saying among photographers: “Your best camera is the one you have with you.”

With that logic, your best camera may be your cell phone. Look for the stories around you. Step one will be to get the shot. Step two could be getting to know the person or people involved. Or, using Nevada’s advice, reverse the order.

Two weeks ago I went to our local high school’s Friday night Football game. The stories were everywhere:

An injured cheerleader got comforted by a friend: 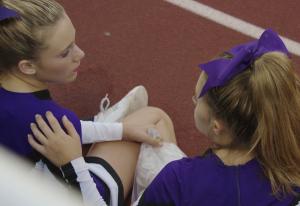 A cheerleader invited a little friend to join the big girls 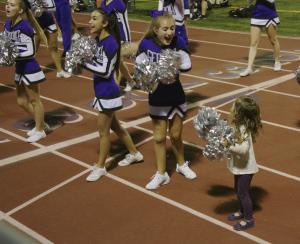 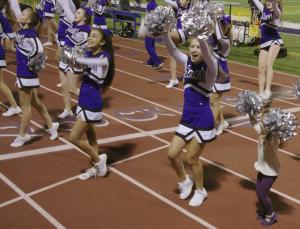 4 thoughts on “Photography: The Shortest Distance Between Two Hearts”