Suddenly, my legs stopped working. A moment later, painful cramping. I couldn’t move. Not one step further. I was at 8,500 feet. The wind was picking up, it was 3:30 in the afternoon, and I was six miles from the car. My boots didn’t fit right, and my feet hurt like hell. My hiking companions were nowhere to be seen. I was lying on the side of the mountain in serious pain. Images of the tragedy on Everest last year raced through my mind. (OK, I’ll admit I tend to get a bit theatrical at times like this.) 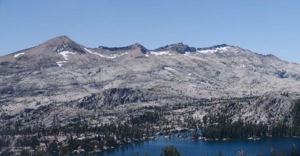 We were attempting to reach the top of 10 ,000 foot Pyramid Peak in the Desolation Wilderness National Forest near Lake Tahoe, in one day. I had made the hike up Pyramid several times when I was 12 and 13 years old as a Boy Scout. No problem. I put this trip together last September with two old scouting friends to see if, as a middle-aged adult, I could do Pyramid again. That day, my two pals (who are my age) made it all the way to the top, but I failed. I was about an hour from the summit when my legs gave out.

After a 30-minute rest, my legs began working again. I reconnected with my companions, and we finally got down the mountain and back to the car. By 10:30 that night I was nursing myself back to health with a shot of scotch and a soak in a hot tub at a nice hotel in Sacramento. But, after months of planning, my dream of seeing Desolation Valley again from the top of Pyramid was shattered. Looking back, I now see this experience as symbolic of other aspects of my life.

Have you ever reached for something you really wanted, and failed? I’ll bet you have. The older I get, the more I see similar scenes repeated in my life and in the lives of colleagues and friends. I see many people whose dreams of greatness, fame, and fortune are never realized. Perhaps it’s a lack of talent, perhaps a lack of persistence, or just bad luck. Who knows? It really doesn’t matter. 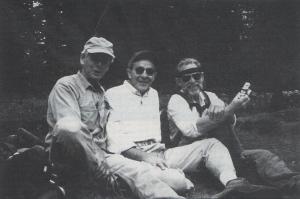 The next time you see a good movie, notice the people in supporting roles who you’ve never heard of, and probably will never see again. Think about it. Each of those people I suspect, has a dream of taking Hollywood by storm. Like some of the big stars, they also went to Yale drama school, studied with Lee Strassberg, paid their dues by putting in years in summerstock – and yet, they will never get top billing.

How many youngsters playing high school basketball dream of being Michael Jordan? How many will ever make it to the NBA? Almost none. (See a great documentary film about this called “Hoop Dreams.”) How many computer hackers dream of starting their own company and becoming the next Bill Gates or Steve Jobs? Many, I would guess. Almost none ever will. How many would-be politicians on local school boards dream of a career in the United State Congress, and are able to do it? Almost none. (A notable exception to this is Anna Eshoo, who did just that.)

More personally, I’m a fine speaker, and have thought what it would be like to keynote the annual meeting of the National Speakers Association. Won’t happen. We have built a very successful training company, and the thought runs through my mind, “Why hasn’t ASTD (The American Society for Training and Development) ever asked me to kick off their annual meeting, instead of, say, Ken Blanchard or Tom Peters?”

I mention all this because I see people, myself included, with dreams of success that don’t have a snowball’s chance in hell of ever happening. These fantasies of success are usually unconscious, but they can eat away at our enjoyment of the moment, and at our ability to appreciate what we are already doing successfully. How far up the mountain are you? Do you appreciate what you’ve done so far? Or is there a nagging inner voice of dissatisfaction that keeps saying, “Someday, I’ll make it really big”?

One of the best illustrations of what I’m talking about here comes from the movie “Mr. Holland’s Opus.” Mr. Holland (played by Richard Dreyfuss) is a high school music teacher who believes he has failed because he has not realized his dream of being a composer. After a long teaching career, he is given a pink slip due to funding cutbacks in the music program.

As he dejectedly walks out of the building carrying what’s left of his career in a cardboard box, he hears noise from the auditorium. He puts down the box and goes in to see the room filled with his current and former music students. They all rise and give him a long, enthusiastic standing ovation. Of course, he is blown away. But the highlight comes when a tall, stately red-headed woman who couldn’t play the clarinet when she was his student, but who is now governor of the state comes in. She addresses him in front of his adoring family, colleagues and students and says, “Look around you. There is not a life in this room you’ve not touched. Each of us is a better person because of you. We are your symphony, Mr. Holland. We are the melodies and notes of your opus. We are the music of your life.”

The curtain then opens to reveal an entire symphony orchestra made up of Mr. Holland’s current and former students. The governor takes her place in the reed section, and the orchestra plays his opus with him conducting and crying. In that moment, Mr. Holland suddenly gets what his life has really been about. It’s not about the failed symphony, it’s about the hundreds of successful music students whose lives he has helped to shape.

Another great film illustrates just the opposite. In “Field of Dreams,” the main character, Ray Kinsella (played by Kevin Costner), says to Dr. Graham (played by Burt Lancaster), “Fifty years ago, for five minutes, you came this close to realizing your dream of being a major league ball player. It would kill some men to get that close to their dream and not touch it. They’d consider it a tragedy.” Dr. Graham responds, “If I’d only gotten to be a doctor for five minutes, now that would’ve been a tragedy.” Bingo! No fantasies here.

How many of us suffer from Mr. Holland’s disease? Believing that our finest days are ahead of us, or that our big dreams are yet to happen, we don’t live in the moment. We may not appreciate the accomplishments we’ve already had. For most of us, I suspect, it won’t get any better than what is happening right now. Being president of the local school board is it. You may not get to the United States Congress. Being the high school basketball star is it. You probably won’t make it to the NBA. Managing a group of six people is it. You are unlikely to become CEO. Getting that one standing ovation is it. Most likely, you will never address the national convention.

So, am I saying not to dream big? Not at all. I am saying that unrealistic, mostly unconscious fantasies about some distant, wildly successful life can actually make our lives miserable and prevent us from appreciating what we’ve already done. For example, I know several people who’ve spent months, and even years working on book manuscripts with hopes of huge advances and big national book tours. They’ve had no agents, no publishers, or much less been published in local newspapers, for starters. All that time, effort, and hope now sits in a drawer, probably abandoned forever.

This is one reason I have such skepticism about the so-called motivational speakers who cajole us that, “If you can dream it, you can do it!” What nonsense.

My plea here is for a reality check. We do what we can do. The media holds out images of great wealth, famous people, and thin waistlines. Many of us unconsciously feel that someday, somehow, we’ll get there. That is why we love stories about unknowns suddenly “being discovered” by some talent scout. Well, it’s unlikely. In fact, it’s not even a worthy goal. Much unhappiness is caused, not by the lofty goals, but by our disappointment at not reaching them.

Psychologist and author Mihaly Csikszentmihalyi of the University of Chicago has spent his career researching happiness. In several books and dozens of articles on what he calls the “flow” state, he explores the dynamics of happiness. He observes that what gives us a sense of satisfaction in life is to be working at the edge of our own competence, striving for a goal just slightly beyond where we are now. What creates a life of despair is to live with fantasies about unrealistic goals.

In my modest career as a speaker, I have received several standing ovations from small audiences of local organizations. At those moments I imagined myself, suddenly, with a national reputation, a corporate jet, and wild, screaming fans around the world. Pure fantasy. Better to enjoy the heartfelt, brief, standing ovation in this room, at this moment. It simply won’t get any better than this. Our company is successful, though not nationally known. We get very positive feedback about how profoundly our training has impacted people’s lives and careers. My book, PowerSpeaking®, is self-published and not a national best seller. It will never make it onto The New York Times’ best seller list. At the same time, I am proud of its unique contribution to the field. For me (and, I believe, for others in our group) this is it. This is what we do. We probably won’t get bigger, richer, or more famous than this. And yet, there is enormous satisfaction in what we do.

I learned a lot from my failure to reach the top of Pyramid. At first I was bitterly disappointed. Now, in retrospect, I see what I did accomplish that day. One thing is certain: I am not disappointed I made the attempt. I would do it again in a heartbeat. In fact, with more training and better preparation, I may try it again next summer. But the view from 8,500 feet – and here is the critical point – was spectacular.

“Education is not the filling of a ‘essel, but the lighting of a fire.”

6 thoughts on “Getting Half Way Up The Mountain”