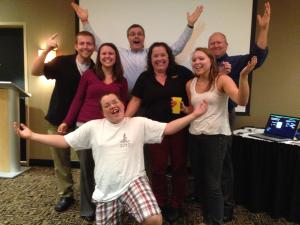 Greg Woloszczuk had the best of intentions. He planned to raise money and collect food for the the North Carolina Food Bank by presenting my Speaking Up book review to local business leaders. Greg advertised heavily on the web, with fliers, and in person. We hoped to get between 25 and 50 people.

Eight showed up: four from Greg’s family, two of his employees, and a job seeker, Richard Gardner. In this graduation photo, Richard is in the back with both arms up. Even though Greg’s restaurant had provided great snacks, and we offered it in a central location at 6PM after work, no one from the local business community showed up. I was disappointed (as was Greg), but up for it.

I modified the agenda to be a blend of PowerSpeaking skills for the kids, plus Speaking Up skills for Richard who was having a major job interview the following week.

The evening was fun for all of us, but it was critically useful for Richard. A few days ago we got this letter from him about the interview.

Hi Greg!
Words cannot express my gratitude for the Speaking Up presentation. My interview with the Town of Cary went fantasticly. During the interview I was asked to give a 15 minute presentation and because of Rick’s advice, I was very ready. I had  PowerPoint slides and a simple handout as a backup. I gave the panel their choice and they went with the handout. I was able to improvise and state my conclusion up front and then support it. The whole interview was scheduled to be 90 minutes, but ended up being 2-1/2 hours because they had so many questions for me. Thank you and your family for what you have done for me. I have another tool in my utility belt for the future.
Richard

Letters like this are what makes our work filled with purpose !