In Boston now being hosted by Tess Stern and Tommy Salter. Tess and I are visiting two clients tomorrow, one for a Speaking Up book review, and another for an executive interview.

Tommy owns a Firehouse Sub Sandwich restaurant on Boylston Street (near where the bombing occurred). We had a sandwich there yesterday. It was delicious (let’s not talk about coronary arteries.) 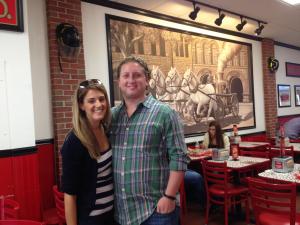 As a child, my parents sent me to the Christian Science Sunday School, mostly because my mother’s mother was active in the church. I used to hear all about “The Mother Church” in Boston. Only a few blocks from the restaurant, Tess and I decided to visit world headquarters for the religion founded by Mary Baker Eddy in the mid nineteenth century. The church’s glory days were in the early twentieth century.

The “Mother Church” is the size of the capital building of a small country. The inside is breathtaking. We were allowed to stroll around and take photos. A greeter was there to tell us all about the history of the church. One thing I wasn’t clear about is where the “science” idea came from. Apparently MB Eddy felt that the teachings of Jesus were logical and predictable – just like science, hence “Christian Science.” Boy there’s a stretch. The church has been losing membership rapidly over the past 50 years. It made me wonder what would happen to this beautiful building if they did go out of business. I asked our host about that, and he acknowledge that the religion is not appealing to younger people these days but added, “Once someone has experienced a miraculous cure through the power of faith, they’ll join.

To be fair, other churches are also losing membership among young people. Surveys indicate that most people, around 92% in the US, say they believe in God, they just don’t attend church, or have no affiliation.

When I as 10, one night I attended a Christian Science Testimonial meeting where a man stood, held up his arm and said that a week before, it had been chopped off at work in a terrible accident. He said that because of his faith, it had grown back. It seemed no one in the church doubted that. Certainly I didn’t. I was only ten. 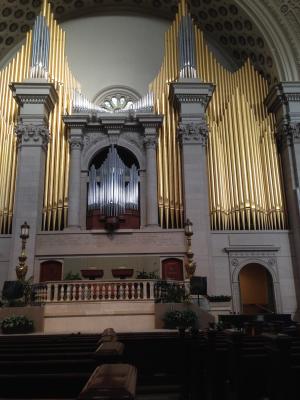 Bet this organ could do a mean version of “Green Onions.” 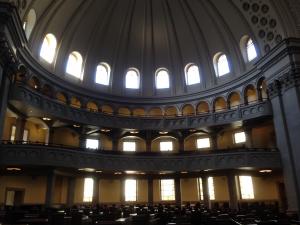 If you ever get to Boston, a visit to “The Mother Church” may be worth your time.