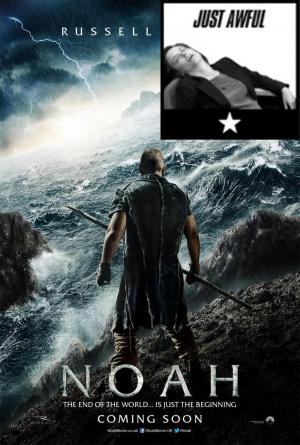 Two thumbs down. Save your money!

Noah presents stark images of what the end of the world would have been like had a vengeful God wanted to kill everything that lived. The movie reflects one version of a fairytale believed in modern times by only Biblical literalists.

In the movie, animals by the thousands come to the ark and settle down into their cages. From then on, it is about the family and their conflicts with Noah who wants to kill his granddaughters because it is God’s will. His sons want to kill him. His wife does a lot of crying, understandably. Imagine the stress.

Meanwhile the animals are docile. Nary a roar. I have imagined a conversation on the ark, “Shem, where are the zebras?” “Ham, I thought you brought the meat to feed the lions. You think they ate the zebras?” Oh, oh.

Fortunately for us, in the battle between religion and science, science is winning. A fascinating book, Genesis and Geology by Charles Gillispie and Nicolaas Rupke, looks at the conflict between science and religion through the eyes of 19th century British geologists who were finding deep conflicts between their religious beliefs and what science was telling them, namely that the flood never happened. It was just a story. This contradiction put these scientists in deep personal turmoil. It seemed the Bible was wrong.

The story of Noah stretches credulity. If the whole earth was flooded, then the highest point, Mt. Everest, at 29,000 feet had to be flooded. So the earth was covered in water to a height of more than five miles. What happened to the water?

The movie ends with the granddaughters being told to “Go forth and multiply.” So we are all descendents of Noah. But who do they multiply with? The only humans are Noah’s family. Does this mean incest? Ah, the mind boggles.

As for me, I’ll take science and evolution. There must have been a point, sometime after Columbus, when about half of humanity thought the world was flat and half thought it was round. I wonder when the tipping point happened. I imagine a cocktail party centuries ago when someone said that the earth was flat and got mocked for having such a view. That is how change happens. By the same token, statistics indicate that church attendance is dropping like a stone. Perhaps we are at such a tipping point.

Fairytales like Noah and the Ark just don’t stand up to today’s critical thinking. The other night, the movie was about one quarter full. Guess we’ve reached a tipping point.