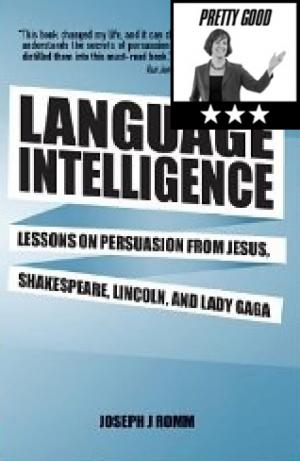 If you are interested in being persuasive, this book is a “must read.” First all, the title. How can you resist the title? Romm makes the point in many different ways that people who shape human history do it with well-crafted language. In our PowerSpeaking training we urge people to use stories, analogies, and metaphor. Those who do, persuade listeners to their point of view. Romm tells us why.
Repeated slogans and metaphors are persuasive, think: “Don’t ask, don’t tell,” “It’s the economy, stupid,” “Don’t end it, mend it,” “No child left behind.” The list goes on and on.

Sara Palin and her right wing Tea Party cronies are SO good at this. For example: “The only way to stop a bad man with a gun is a good man with a gun.” Or, in the health care debate, Palin and the far right scream: “Death panels,” while the liberals outline, yet again, their 12 point program for health care cost reduction. Guess what people remember?

Palin outdid herself again on national television when she appeared at a She-Pac Iowa rally to support Joni Ernst’s candidacy for the Senate. Ernst has used her hog farming background to promote her candidacy. So Palin said, “Let’s make those big spending piggies squeal.” Asked about her position on water boarding, Palin again hit the ball out of the park, “Water boarding is how we baptize terrorists.”

Fortunately it takes more than successful metaphors that rile up the base to win an election. Palin’s political capital is dropping like a stone.

But Romm points out hundreds of examples where language rich in metaphor has persuaded people from the Greeks and Romans, to the people who wrote the Bible, right up to today’s pop culture.

The book is accessible, yet well documented. Upgrade your communication by giving it a read. Your “persuasive index will go up and to the right.” (How’s that for a metaphor.)

One thought on “Language Intelligence: Lessons on Persuasion”